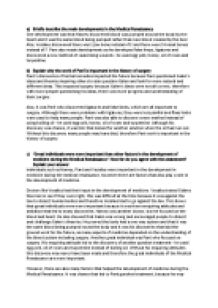 The Developments in Medicine in the Renaissance

Transfer-Encoding: chunked ï»¿1. Briefly describe the main developments in the Medical Renaissance One development was that Harvey discovered blood was pumped around the body by the heart and it was the same blood being pumped rather than new blood created by the liver. Also, Vesalius discovered there was 1 jaw bone instead of 2 and there were 5 breast bones instead of 7. Pare also made developments as he developed false limps, ligatures and discovered a new method of cauterising wounds - he used egg yolk, honey, oil of roses and turpentine. 1. Explain why the work of Paré is important in the history of surgery Paré’s discoveries of herbal remedies impacted the future because Paré questioned Galen’s ideas and theories inspiring others to also question Galen and look for more natural and different ideas. ...read more.

It was chance that led to Paré gunshot treatment, because he may never have come up with it if it was not for the boiling oil running out. Also, Harvey’s discovery was influenced by the water pump - although he did make the link, the technology around at the time of the Renaissance helped Harvey make his discovery. It was also the technology that allowed the doctors to print multiple copies of their books and to spread their ideas, that found their way to other doctors who then developed the ideas. Without technology, there would be little communication that helped Harvey as he gained ideas from the knowledge of other doctors. There are some factors such as chance and technology that helped the great individuals of the Medical Renaissance, but ultimately it was the individuals themselves that led to the discoveries, therefore it is the individuals who are more important in the development of medicine during the Medical Renaissance. ...read more.