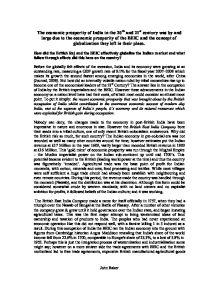 The economic prosperity of India in the 20th and 21st century

The economic prosperity of India in the 20th and 21st century was by and large due to the economic prosperity of the BEIC and the concept of globalization they left in their place. How did the British Raj and the BEIC effectively globalize the Indian market and what follow through effects did this have on the country? Before the globally felt effects of the recession, India and its economy were growing at an outstanding rate, measuring a GDP growth rate of 9.1% for the fiscal year 2007-2008 which makes its growth the second fastest among emerging economies in the world, after China (Journal, 2008). But how did an internally volatile nation ruled by tribal monarchies rise up to become one of the economical leaders of the 21st Century? The answer lies in the occupation of India by the British imperialists and the BEIC. However these advancements in the Indian economy on a nation level have had their costs, of which most could consider an ethical moot point. ...read more.

The British East India Company made a name for itself officially in 1757, when they had a triumph over the Nawab of Bengal at the Battle of Plassey. After a number of other victories the company grew & grew until it held governance over the Indian state, and began instating agricultural taxes. This was the first major attempt to bring westernized ideas of land ownership and taxation of products to India. The peoples who had never experienced an economic operation like this did not respond well, with a famine killing 1 in 3 induced as a result. During this occupation of India the BEIC ran the Indian economy into the ground with figures from Cambridge historian Angus Maddison revealing that India's share of the world income fell from 22.6% in 1700, comparable to Europe's share of 23.3%, to a low of 3.8% in 1952. Perhaps this is just the integration process of westernization and industrialization some might say; however on a more sinister side the trade agreements with BEIC and the British motherland led to free trade agreements, expensive British manufactured agricultural goods like cotton, machinery and technology. ...read more.

This significant increase due to capitalist Britain ideologies can be interpreted as a final streak of good luck for the exploited Indian economy or an expected final result depending on which side of the fence you choose to take. However it shows most certainly how the Indian economy has harnessed it's enormous population and the globalized market and created a blend, of which has made it ranked one of the fastest growing nations in the world. Throughout the last 300 or so years, the growth of the Indian economy has gone somewhat unnoticed, however the scale of changes they've faced are dare-say rougher than any westernized country in the same time period. Although pre-British Raj, the Indian economic was doing well, however it is comparable to that of Middle Eastern merchant companies, and what the British brought to India was the whole new concept of Globalization and Industrialization - a new concept to all outside of Eastern Europe. However the great losses of life, culture, natural resources and economic growth leave you wondering the 'What if's' of Indian economic cycle. ...read more.