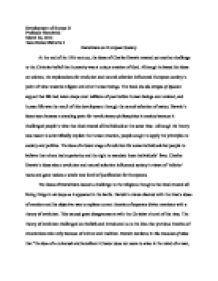 The Effects of Darwinism on European Society

Development of Europe II Professor Hanebrick March 26, 2012 Take Home Midterm 2 Darwinism on European Society At the end of the 19th century, the ideas of Charles Darwin created yet another challenge to the Christian belief that humanity was a unique creation of God. Although he based his ideas on science, the explanations for evolution and natural selection influenced European society's point of view towards religion and other human beings. The book On the Origin of Species argued that life had taken shape over millions of year before human beings ever existed, and human life was the result of this development through the sexual selection of mates. Darwin's ideas soon became a standing point for revolutionary philosophies in society because it challenged people's view that God created all individuals at the same time. Although the theory was meant to scientifically explain the human creation, people sought to apply the principles to society and politics. The idea of a lower stage of evolution for some individuals led people to believe that others had superiority and the right to mandate those individuals' lives. ...read more.

With his radical ideas for the time, Darwin was asking people to open their minds and think for themselves instead of following whatever they were taught without questioning. Furthermore, the struggle of social classes in the world was due to the fact that some people resulted from evolution being better and more advance than others. This is the reason why society has different races which are not in the same position. Herbert Spencer ideas of "survival of the fittest" later became emblematic of Darwinism, and it involves the beliefs that "man tends to increase as a greater rate than his means of subsistence, and natural selection will have affected whatever lies I its scope." (Lualdi, 168). Darwin was trying to say that men have been raised to their present state, and the difference between their developments is what accounts for the distinct races in the world. There are some races that do not develop as well as others such as the Negros whose differences are so emphasized that they could be a subspecies of human beings. ...read more.

In the song, Kipling portrays the white men as saviors of the inferior races, he says "Take up the White Man's burden-the savage wars of peace, ill full the mouth of famine and bid the sickness cease." (Lualdi, 178). At the time what it meant to be European and civilized was to be white men with money and a duty to give inferior races their idea of civilization which included a compensation for the white's burden in dealing with inferior races. In conclusion, social Darwinism gave imperialism a whole new meaning and justification in introducing the natural differences between races. Social Darwinism is an application of Darwin's theories to bolster racist arguments. For example, the politics of Eugenics during Nazi Germany executed in the Holocaust. However, the theory of evolution does not provide answers to moral question and without caution it can be misplaced. The ideas of imperialism at the time lead us to question who was civilized: the intruder who used violence to get his way in the inferior races' home or the 'inferior races' who were minding their own business. ...read more.