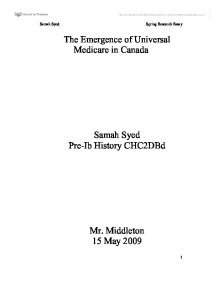 The Emergence of Universal Medicare

The Emergence of Universal Medicare in Canada Samah Syed Pre-Ib History CHC2DBd Mr. Middleton 15 May 2009 In 1957, Canada approached creating a publicly funded health insurance system. This originally was provided by the Hospital Insurance & Diagnostic Services Act1, approved by the government. This provided Canadian citizens free hospital care, laboratory and radiological diagnostic services. During 1961, all Canadian provinces and territories had public hospital insurance plans which were covered by the federal government. Canada's universal Medicare was outlined by the Medical Care Act in 19662. This is a nationwide health insurance program which interlocks ten provinces and three territories. This was to ensure that that all Canadian citizens in Canada have access to medical services on a pre-paid basis3. Between the provinces and the federal government, they had arranged cost-shares to supply universal health care to every individual in Canada. In 1966, this universal plan covered hospital costs and the expenses of visiting the doctor. The purpose of this essay is to investigate the historical significance of universal Medicare in Canada. As well as, the emergence of Medicare and how it truly reflects Canadian values. The emergence of universal Medicare has transformed into a controversial issue. ...read more.

Lester B. Pearson was the future aid for Tommy Douglas because he was the current Prime Minister as well as helped Medicare become into a national entity. With Tommy Douglas and Lester B. Pearson creating universal Medicare for all of Canada, many controversies happened during the creation of Medicare. Even though universal Medicare is one of Canada's most defining attribute, it has become a controversy between politicians. The Health Council of Canada has said that "Herein lies one of the puzzles of Canadian health care: Canadians increasingly view the health care system as unsustainable and under threat, even as their own experiences with the system are mostly positive."11 This quotation portrays the fact that Canadian citizens view the health care system as unsustainable because of federal government going into a deficit. The federal government on the other hand is slowly recovering and reinvesting in health care due to the numbers of doctors being trained. Universal health care in Canada is a controversy topic between politicians because of regulatory-hospital-based quality assurance and the economy12. These two issues are related to each other because it doesn't allow certain doctors operate a private clinic on their own and earning the additional costs for running a surgical facility from their fees as well. ...read more.