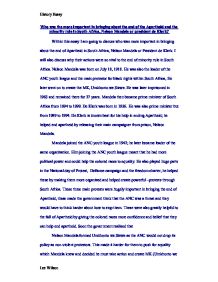 The end of Apartheid

This made them realise that anti-Apartheid organisations were becoming a lot more powerful than was thought before. The government was forced to act quickly. MK and its policy of sabotage put pressure on the white government as it injured many white people and killed as many as well, this scared the government as they didn't want any people to be hurt or killed. They were forced to rethink the position of Apartheid policy in their government as it was causing huge trouble, segregating the White from the mixed races. The government knew that the apartheid system was becoming less and less efficient, so something had to be done. They were forced to abolish some apartheid rules. Mandela being imprisoned put pressure on the government as it created huge riots and major protests throughout South Africa which were very difficult for the government to stop. It also caused problems for the government inside prison as Mandela was creating huge problems and joining with other inmates to stage massive protests. Mandela was the anti-Apartheid leader because of his actions and was internationally famous icon and had much respect worldwide. This meant that South Africa had made big enemies and boycotts were set up to drain South Africa of its economy. ...read more.

On the other hand the work that de Klerk did was equally important because he was the president of South Africa, he was the man with the power to change the Apartheid system. However, it can also be argued that it was not just the work they did separately that was vital in ending Apartheid, but that the work they did together was also extremely important because the creation of CODESA they agreed to together was important in making all rights official. They both took part in the free elections showing that they have beaten apartheid and that this is a great moment in South African history. They both then joined together to form a new part of democratic government in South Africa. In conclusion, I believe that both men were vitally important in the ending of Apartheid and minority rule in South Africa. Their work both separately and jointly was crucial to the fall of Apartheid and the importance of their actions is inextricably linked by them both being awarded the Nobel Peace Prize, jointly, in recognition of their work. They were both awarded with the same prize as they were both equally as important to the fall of apartheid. They were both equally as important in the history of South Africa and Apartheid, ?? ?? ?? ?? History Essay Lee Wilson ...read more.