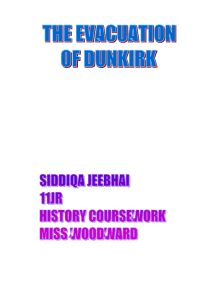 The Evacuation of Dunkirk.

THE DUNKIRK EVACUATION A "MIRACLE OR A DEFEAT" The Dunkirk evacuation can be seen in two forms a 'Miracle' or a 'Defeat'. The British took it as a wonderful miracle; however the Germans believed that Dunkirk was a defeat for the British. The reasons for this and evidence to support it will be discussed below. Reasons why the Dunkirk evacuation can be seen as a miracle To many people, the Dunkirk evacuation was seen as a great miracle. The Dunkirk evacuation ended on the 4th of June, 1940. The British brought back home with them up to 300,000 soldiers who fought the Second World War on behalf of the British and French. This was thought to be an amazing achievement because it meant that most of the British troops could be used to fight again during the war. These troops were very important to Britain, as they were very experienced and it would be difficult for the British to rebuild a whole new army to fight the Germans. Now Britain would still be able to continue in the war as they had not yet lost their army. Below is a photograph that shows British soldiers happy to be home after their rescue from Dunkirk. This source is a contemporary source that has been produced by the British to show how the evacuation was a miracle. Source M9 Another source that supports the evacuation as a miracle is the shown below. The table shows the number of British and Allied troops that landed in England by 4th June. The author of this source and its origin is unknown; it is also unknown as to when this source was produced. However the source helps us to understand why the evacuation can be seen as a miracle due to the vast amount of soldiers that were saved over a period of nine days. Source M2 Some of the great miracles that took place were on the beaches of Dunkirk. ...read more.

Also when Britain knew that they were being defeated they abandoned the support of the French, to save their own necks. The French waiting at Dunkirk were very badly treated and it could be said that France had been betrayed by its own Allies. Source D7 In conclusion the Germans claimed that the BEF were defeated, they may have escaped but they left many possessions behind which proved their defeat. These made the Germans belief stronger, that the BEF were cowards and were scared of them and ran to Dunkirk for help. The different interpretations of the Dunkirk evacuation Both the German and British views are totally different. They have come up with different interpretations of the Dunkirk evacuation. This will be discussed in this section. The Contemporary British View During the period of the war, the evacuation was an extremely critical factor for the British Government. They had to be very careful, making sure that the people don't find out about the condition at Dunkirk, otherwise it would a cause a lot of panic and chaos. So at that time the Government provided a positive attitude about the evacuation. It was important for them to keep up their morale and make the people feel proud of their country and the armed forces. (SOURCE M3) This source is extracted from an illustrated book of the History of WW2. It was produced by the British and was published after the war. It claims that the Dunkirk evacuation was a miracle. A powerful quote from Churchill's report to Parliament at the time of the evacuation, gives the impression that the BEF were victorious and that it was a miracle for so many men to be saved. The source refers to Dunkirk as a miracle, the source can be said to be quite reliable, as it is from a resource book and isn't a form of propaganda, however the speech made by Churchill cannot be relied upon as he only wanted to keep up the peoples morale and therefore used a lot of propaganda. ...read more.

In other words it is humiliating and degrading the British by portrayed this Cartoon. The reason Italy supported Germany in the war is because Italy had joined the German forces during the German attack against France. So all the way they were for Hitler and if anyone went against Hitler they supported him just like America had supported Britain. The source on the following page is a German poster which was used in France. It was used to create hatred against the British. What the source is showing is that the French soldiers are holding back the Nazis while the British troops escape. It is trying to show the French how the British are unfaithful as they betrayed the French troops and left them to face the Nazis by themselves while they tried to retreat. CONCLUSION After analysing all these sources and looking at different views you can conclude your own view. In my opinion Dunkirk was a big defeat for the British because they fled the German attack, rather than facing them with courage. Also many sources after Dunkirk agree with this definition because now they are able to tell the truth of what really happened due to the fact that it will not affect anybody. However, I do think that the Dunkirk evacuation was in a way a miracle due to the large number of soldiers that had been rescued. My reasons for believing this are not from the sources that were used to create propaganda but by reviewing the sources I have come to a conclusion that the evacuation was a military defeat as the president even clarified that in private, but it was successful in helping many of the soldiers to escape from the hands of the Nazis. If the Frenchmen at the beaches had not been there to help the British, then the evacuation would never have been seen as a miracle. My view is quite balanced on the evacuation and overall I think that to some extent the evacuation was a miracle as well as a defeat. ...read more.