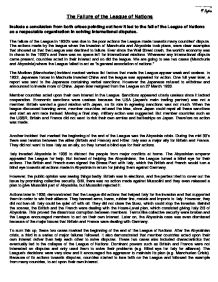 The Failure of the League of Nations.

The Failure of the League of Nations Include a conclusion from both crises pointing out how it led to the fall of the League of Nations as a respectable organization in solving international disputes. The failure of the League in 1930's was due to the poor actions the League made towards many countries' dispute. The actions made by the league when the invasion of Manchuria and Abyssinia took place, were clear examples that showed us that the League was destined to failure. Ever since the Wall Street crash, the world's economy was in chaos in the 1930's and there was no space left for international relations. Whenever any international dispute came present, countries acted in their interest and so did the league. We are going to see two cases (Manchuria and Abyssinia) where the League failed to act as "a general association of nations." ...read more.

But member countries such as the USSR, Britain and France did not want to risk their own armies and battleships on Japan. Therefore no action was made. Another incident that marked the beginning of the end of the League was the Abyssinia crisis. During the mid 30's there was tension between the allies (Britain and France) and Hitler. Italy was a major ally for Britain and France. They did not want to lose Italy as an ally, so they turned a blind eye for their actions. Italy invaded Abyssinia in 1935 to distract the people from major conflicts at home. The Abyssinian emperor appealed the League for help. But instead of helping the Abyssinians, the League turned a blind eye for their actions. The British and French even signed the Stresa Pact with Italy, which the British and French would turn a blind eye towards all actions made in Abyssinia in return for joining them against Germany. ...read more.

Later on, the Abyssinia case was even dismissed because of the major issues that Britain and France were dealing with Germany. To sum this up, these two cases marked the beginning of the end of the League of Nations. After the Abyssinian crisis, a third in a series of major failures followed. It also demonstrated that member countries acted upon their own interest rather than help each other to solve disputes. These two cases also included characteristics that eventually led to the collapse of the League of Nations. Dominant powers such as Britain and France were not interested on disputes and only used them to solve their problems (e.g. Blind eye for Italy for alliance). The League's decisions were very slow and it encouraged the aggressor to maintain its plan (e.g. Manchurian Crisis). Because of its actions towards disputes, countries started to lose faith on the League and followed the example from many countries, to act upon their own interest. Karen Chang 9th Aztec ...read more.