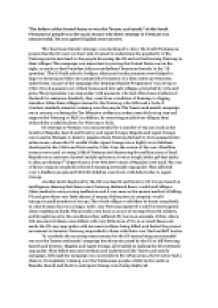 The failure of the United States to win the hearts and minds of the South Vietnamese people was the main reason why their strategy in Vietnam was unsuccessful. Do you agree?

﻿?The failure of the United States to win the ?hearts and minds? of the South Vietnamese people was the main reason why their strategy in Vietnam was unsuccessful.? Do you agree? Explain your answer. The ?hearts and minds? strategy, was developed to show the South Vietnamese people that the US were on their side. It aimed to undermine the popularity of the Vietcong and in turn lead to the people favouring the US and not harbouring Vietcong in their villages. The campaign was important in proving the United States was in the right, so much so that President Johnson underlined ?hearts and minds? in his ?28 speeches?. The US built schools, bridges, clinics and roads; peasants were helped to improve farming and they encouraged the formation of a democratic government, under Diem. ...read more.

US strategy in Vietnam was unsuccessful for a number of reasons such as the results of Napalm, Search and Destroy and Agent Orange. Napalm and Agent Orange were used in Vietnam to destroy jungles where Vietcong hid and to force peasants into urban areas, where the VC couldn?t hide. Agent Orange was a highly toxic defoliant, developed in the 1960s and first used in 1966. Over the course of the war, 82million tonnes were used, covering 10% of Vietnam and destroying five million acres of land. Napalm was a mixture of petrol and phosphorous, it was a tough, sticky gel that sticks to skin, producing 5th degree burns. Over 400,000 tonnes of Napalm were used. ...read more.

My Lai is an example of this; where 300 innocent civilians were killed, with very little trace of VC. As a result these acts made the US very unpopular with innocent civilians being killed, and fueled the protest movement in America. Vietcong responded to these with their own ?find and kill? tactics. To conclude, the most important reason for the US tactics being unsuccessful was not the ?hearts and minds? campaign but the tactics used by the US to kill Vietcong. Search and Destroy, Napalm and Agent Orange, all resulted in making the US extremely unpopular. They killed innocent civilians and undermined the ?hearts and minds? campaign. Although the campaign was successful in the urban areas, the US never had a chance of completely winning over the Vietnamese people, whilst tactics such as Napalm, Search and destroy and Agent Orange were being deployed. ...read more.