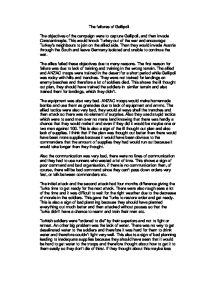 The failures of Gallipoli

The failures of Gallipoli The objectives of the campaign were to capture Gallipoli, and then invade Constantinople. This would knock Turkey out of the war and encourage Turkey's neighbours to join on the allied side. Then they would invade Austria through the South and leave Germany isolated and unable to continue the war. The allies failed these objectives due to many reasons. The first reason for failure was due to lack of training and training in the wrong terrain. The allied and ANZAC troops were trained in the desert for a short period while Gallipoli was rocky with hills and trenches. They were not trained for landings on enemy beaches and therefore a lot of soldiers died. This shows the ill thought out plan, they should have trained the soldiers in similar terrain and also trained them for landings, which they didn't. The equipment was also very bad. ANZAC troops would make homemade bombs and use them as grenades due to lack of equipment and ammo. The allied tactics were also very bad, they would always shell the trenches and then attack so there was no element of surprise. Also they used stupid tactics which were to send men over no mans land knowing that there was hardly a chance that they would make it and even if they did it would be maybe one or two men against 100. This is also a sign of the ill thought out plan and also lack of supplies. ...read more.

If the plan were thought through better then the commanders would have noticed that this campaign was much harder then they thought and would take longer to take over Gallipoli. If they had noticed this then they would have maybe got more supplies to the trenches because they would have known how much was needed and prepared it earlier on. But because they didn't plan out the campaign very well there was a lack of supply since Britain had to also supply all the other soldiers fighting elsewhere. The commanders underestimated the Turks and therefore they thought the campaign would be so easy. Just like in Russia in WWII, there were many more Turkish soldiers then British soldiers. The Turks were simply "ordered to die" by their commanders. The Turks were of course more enthusiastic about the war and had a higher morale because they were fighting for their country. Of course it is much harder to invade then to defend because of this reason. The commanders were also too ambitious, the plan had no chance of success, even Churchill's sidekicks, for example, Admiral Fisher, did not believe in the plan and resigned due to knowing the plan wouldn't work. If the commanders thought the plan through carefully they would have noticed that their plan to have an open sea route to supply Russia was much harder then they thought. ...read more.

All of these reasons are linked together; it is hard to say which reason was the most important for the failure of the Gallipoli campaign. The most obvious links are the links between poor command and bad organisation, and between the ill thought-out plan and the lack of soldiers and supplies. But I think the main reason for the failure of the Gallipoli campaign is poor command. I think that if there were better command, there would have been a much better thought-out plan because they would have given more thought to it and seen that their objectives were harder to do then they thought. Also if there was better command, they could maybe negotiated with other commanders and gotten more than 20,000 soldiers, which were not enough to take over Turkey. If the plan had been thought out better there would not have been soldiers dying needlessly, like the soldiers on the battleships hitting the mines, and therefore there would maybe not have been a lack of soldiers in Turkey. Also if there were better command, then there would have been better organisation. For example, if the commanders gave the soldiers better orders to follow then they might have been more successful. For example when the British troops dug in instead of over-running the Turks, which they could have done, the British troops did not know what exactly to do, and therefore they dug in. If the commanders gave orders not to dig in and keep going then they could have beaten the Turks in that battle. ...read more.