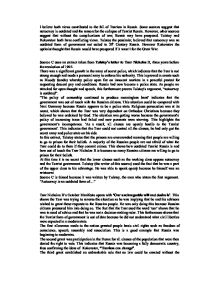 The fall of Tsarism in Russia.

I believe both views contributed to the fall of Tsarism in Russia. Some sources suggest that autocracy is outdated and the reason for the collapse of Tsarist Russia. However, other sources suggest that without the complications of war, Russia may have prospered. Tolstoy and Kokovstov both have conflicting views. Tolstoy the pessimist, believed that autocracy was an outdated form of government not suited to 20th Century Russia. However Kokovstov the optimist thought that Russia would have prospered if it wasn't for the Great War. Source C uses an extract taken from Tolstoy's letter to Tsar Nicholas II, three years before the revolution of 1905. There was a significant growth in the army of secret police, which indicates that the Tsar is not strong enough and needs a personal army to enforce his authority. This is proved in events such as Bloody Sunday whereby police open fire on innocent workers in a peaceful protest for requesting descent pay and conditions. Russia had now become a police state. As people are attacked for open thought and speech, this furthermore proves Tolstoy's argument, "autocracy is outdated". "The policy of censorship continued to produce meaningless bans" indicates that the government was out of touch with the Russian citizens. This situation could be compared with Nazi Germany because Russia appears to be a police state. Religious persecution was at its worst, which shows that the Tsar was very dependant on Orthodox Christians because they believed he was ordained by God. The situation was getting worse because the government's policy of increasing taxes had failed and now peasants were starving. This highlights the government's incompetence. 'As a result, all classes are openly hostile to the Tsarist government'. This indicates that the Tsar could not control all the classes, he had only got the secret army and police state on his side. In this extract, Tolstoy states that the prisons are overcrowded meaning that people are willing to go to prison for their beliefs. ...read more.

and Germany. Source A does not show any evidence for the optimistic view, Kokovstov's idea, "Without war Tsarist Russia would have survived and prospered". The reason for this is because at this time there was not a great threat of war. However it does suggest reasons for the Pessimist view, Tolstoy's idea, "Autocracy is an outdated form of government not suited to twentieth century Russia". This is because while the Tsar had power over the country, it was kept industrially behind. In this section I am going to compare Source E and Source J. Source E is a painting, although it resembles a photo, that shows Tsar Nicholas II blessing his troops in 1914. His infantry soldiers are kneeling down to him whilst other troops, higher up in rank, are mounted on horses. Source J is a photograph of soldiers in Petrograd supporting the revolution in March 1917. These soldiers are all dressed warmly and have their swords drawn as if they are willing to challenge the Tsar. The image shown in Source E is a painting and is more questionable because of the fact that it is a painting. The artist controls every aspect of the painting and so it is possible that this source could have been used as propaganda. This suggests that Source E could be unreliable. Source J, although a photo, could have also been controlled as well. In the photograph, one can see all the troops' faces and they are all staring at the camera. There is also a banner in the background and the words are also visible to the viewer of the photo. Of course this aspect may be coincidence, but it suggests that Source J was a posed photograph. The image portrayed in Source E shows that the soldiers are demonstrating their loyalty and their respect to the Tsar by kneeling down. This indicates that the soldiers' loyalty is not in question. ...read more.

The Tsarina looks lovingly at the Tsar which is ironic because she has been rumoured of having an affair with Rasputin. The crown is on the Tsarina's head as if to symbolise the fact that at that time she was the one with the power while the Tsar was away. Rasputin's hand is around the Tsarina, this could suggest two possibilities. Either to represent that he almost has a grip on the Tsarina, a grip on power over Russia because she is governing Russia at that time. In conclusion this evidence supports Tolstoy's idea, "Autocracy is an outdated...", because it portrays how blind and oblivious the Tsar was to the activities back 'home'. It also demonstrates how impressionable the Tsarina was and how Rasputin was able to influence the organization of Russia but again it was war that highlighted this weakness and therefore provides evidence for Kokovstov. In conclusion to this essay, I believe both views contribute to the fall of Tsarism in Russia. V. N. Kokovstov is right because it was the war that highlighted the outdated form of government in Russia. However Kokovstov is not completely correct as it may have been that without war, Tsarism in Russia may have still collapsed. Tolstoy's idea appears to contribute more as it is clear that autocracy was out of date. The Tsar tried to handle too much responsibility all on his own. The Russian people were extremely dissatisfied with Tsarism. Tsar Nicholas II was gradually losing everything from the people of Russia to his own personal army. The effects of war caused the necessary levels of resentment to topple the Tsar therefore had Tsarism not been out of date, maybe the war would have not been such a problem. I will side with L. Tolstoy as all of my conclusions lead me to believe that Tsarism was definitely out of date and for this reason a revolution was inevitable. ...read more.