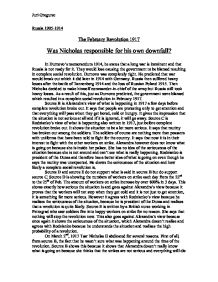 The February Revolution 1917 - Was Nicholas responsible for his own downfall?

Russia 1905-1914 The February Revolution 1917 Was Nicholas responsible for his own downfall? In Durnovo's memorandum 1914, he states that a long war is imminent and that Russia is not ready for it. They would lose causing the government to be blamed resulting in complete social revolution. Durnovo was completely right. He predicted that war would break out which it did later in 1914 with Germany. Russia then suffered heavy losses after the battle of Tannenberg 1914 and the loss of Russian Poland 1915. Then Nicholas decided to make himself commander-in-chief of the army but Russia still took heavy losses. As a result of this, just as Durnovo predicted, the government were blamed which resulted in a complete social revolution in February 1917. Source B is Alexandra's view of what is happening in 1917 a few days before complete revolution broke out. It says that people are protesting only to get attention and that everything will pass when they get bored, cold or hungry. It gives the impression that the situation is not serious at all and if it is ignored, it will go away. Source C is Rodzianko's view of what is happening also written in 1917, just before complete revolution broke out. ...read more.

Source D shows the sheer number of workers that are on strike by the 25th February. This is a reason for the Tsar to abdicate because it shows that the strikes are very serious and that he may easily loose control of the city, Source E again gives the Tsar a reason to abdicate because it shows that revolution is inevitable and he is going to loose control. In Source F, soldiers are shown to be very serious about revolution and carry banners saying 'Down with the Tsar. Long live the republic'. These same soldiers, the day before had shot down demonstrators and therefore it is now obvious that all control is lost and there is almost no hope of regaining the people's support. Source G shows that the capital is in complete chaos and a new government is wanted and needed. It also shows that Nicholas ignored all the warnings given to him. This is a reason for his abdication because again, it shows that Nicholas has lost all control and is not wanted anymore. All these reasons show why Nicholas abdicated because when they are combined they show that there is no hope for Nicholas any more and the capital is in complete ruin and everyone blames him for it. ...read more.

Also if Nicholas had not been so oblivious to what was going on around him and listened to Rodzianko then maybe the revolution wouldn't have happened. However he chose to ignore any warnings, which meant that he was responsible for allowing the situation to get out of control However some people may argue that a revolution in Russia was inevitable for several reasons. First off, Russia was backward and different from other great powers like Britain, France and Germany, who all had elected parliaments and political parties, the Tsar ruled alone as and autocrat. Industrialisation had not yet happened in Russia as in the other great countries, and peasants made up 80% of it. However the peasants were not happy because they wanted the nobles land, because they worked on it and thought it rightly belonged to them. The workers were also not happy because of increasingly bad working and living conditions. For these reasons, it is also shown that although it was Nicholas who triggered of the revolution in February 1917, a revolution was bound to happen some time in Russia. However this is from other historical knowledge and when only looking at the sources, it is obvious that it was Nicholas' fault that the situation got out of hand in Petrograd in 1917. Juri Gregurec ...read more.