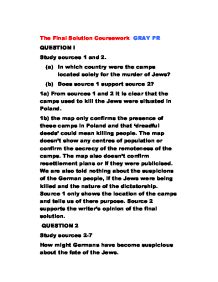 The Final Solution Coursework GRAY PR QUESTION I Study sources 1 and 2. (a) In which country were the camps located solely for the murder of Jews? (b) Does source 1 support source 2? 1a) From sources 1 and 2 it is clear that the camps used to kill the Jews were situated in Poland. 1b) the map only confirms the presence of these camps in Poland and that 'dreadful deeds' could mean killing people. The map doesn't show any centres of population or confirm the secrecy of the remoteness of the camps. The map also doesn't confirm resettlement plans or if they were publicised. We are also told nothing about the suspicions of the German people, if the Jews were being killed and the nature of the dictatorship. Source 1 only shows the location of the camps and tells us of there purpose. Source 2 supports the writer's opinion of the final solution. QUESTION 2 Study sources 2-7 How might Germans have become suspicious about the fate of the Jews. ANSWER 2) Sources 2-7 tell us what some Germans could have known about what would happen of Jews. In source 2, from 'Nazi Policy Against the Jews' by William Carr, tells us that the Nazis tried to keep things secret. Regardless of this rumours did circulate about appalling 'deeds in the East'. At this time a lot of people had to move to live elsewhere as a result of Nazi 'resettlement'. The German citizens may not have questioned the fate of Jews mainly due to the fact that, as we are made aware of in this source, "one must not forget that a dictatorship gradually corrupts its citizens: to ask too many questions, let alone protest was to risk arrest and possibly death'. There is also the possibility that they assumed the Jews had been resettled in other parts of Eastern Europe. ...read more.

However this extract is similar to Source 8. Source 10 is an extract from "Hitler's Willing Executioners' by Daniel Goldhagen. The title suggests this source is anti-Nazi as it uses the word Executioners'. The author's name, Goldhagen sounds Jewish. This would provide bias, reducing the reliability of the source. It is a diary entry so it is primary evidence. He says, "Jews are disappearing" suggesting first hand knowledge of this. The other references are to "Ghastly rumours which suggests he has been told, and accepts these because she is against Nazism. This source is not very reliable because he tried to help Jews and is anti-Nazi. QUESTION 4 Which of these sources do you consider the least reliable? ANSWER I think that source 10 is the least reliable. There is no evidence that the woman has witnessed any evidence which backs up the rumours he has written about. QUESTION 5 a) In what ways were jews represented in these sources b) Why were jews represented in these ways in the Nazi period? Answer Sources 11-14 are poster type images of what Nazis want to suggest are 'typical' Jews. Of the Jewish people in sources 11,12 and 13 Jews are shown as ugly with big noses, unshaven and fat. In source 13 the physically fit Aryan worker is compared to fat, seated Jew with a brief case, There is propaganda - in source 12 it is suggested that only traitors buy from Jews. Source 13 is aimed at children comparing the strong man who can work and fight with the Jew who, the book says, 'is the greatest scoundrel in the Reich". Source 14 shows begging children - again always asking like the Jew in Source 11. Source 11 is a Nazi poster for the 'Eternal Jew' exhibition held in 1937. The title 'Eternal Jew' suggests this is the way Jews have always been and always will be. ...read more.

Source 6 tells us that allied countries made sure that the Germans knew exactly what was happening by radio broadcasts and leaflets. Nazi followers may have believed this 'Nazi propaganda to try to turn them against the Nazis. Goldhagan suggests also that many Germans did not care what was happening to the Jews. This may be true. Sources 11-14 suggest that Nazis were increasingly preparing the German people for the 'Final Solution' Each source is portraying the Jews to be inferior and a problem. This suggests people did not know but would be told about the Final Solution. Sources 3, 4 and 5 show that some Germans should have known about the camps like the ones who lived near them and the people who knew workers would have heard what was happening in the camps. Some might also have known that Hitler would have treated anyone who opposed this as a traitor and maybe killed them as was common in a dictatorship. The sources mainly describe information as being given by rumours and stories which were second hand an not likely to be accurate. This extract is very biased. I would agree that there was likely to have been "Willing Executioners who committed terrible acts against Jews.I do not agree that all Germans supported the killing of the Jews or took part in the atrocities, By 1942 Germany is afraid of communism and had become firmly under the control of Hitler. Germans had been given a lot of propaganda against Jews. However, many Germans must have known Jews and had friends who were Jews like the lady in source 10. Anne Franks' Diary tells of the fear Jews had in Europe at this time. I do not think that ordinary people would have believed that what did happen was happening. They may have been too afraid themselves to question it, During this time there is a lot of fear and confusion. The Germans would have been mainly concerned for themselves. I do not think they would have had much concern about where the Jews had gone. ...read more.