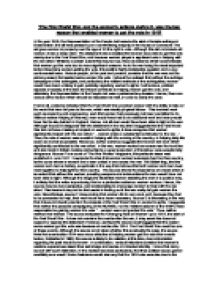 The First World War, and the womans actions during it, was the key reason that enabled women to get the vote in 1918 Do you agree?

'The First World War, and the woman's actions during it, was the key reason that enabled women to get the vote in 1918' In the year 1918, the Representation of the People Act became the start of female suffrage in Great Britain; the bill was passed by an overwhelming majority in the House of Commons. The act gave women of property over the age of 30 the right to vote. Although this did not include all women, it was a major start. The statement above implies that women were able to get this vote mainly due to the First World War, and because women played a significant role in helping with the war effort. Whilst to a certain extent this may be true, there is evidence which could indicate that women got the vote due to more significant reasons. As to the war being the most important factor influencing women getting the vote, this is still a highly debateable question and a very controversial issue. Various people, of the past and present, consider that the war was not the primary reason that sealed some women the vote. It should be realised that without the suffrage campaigns of the suffragists, and particularly the militant methods of the suffragettes, women would have been unlikely to gain publicity regarding women's rights. ...read more.

Thus, while it is possible that their role in the workplace would have earned them political advancement eventually, it was the war which highlighted the economic and strategic value of women to the country. From this, it is clear that the First World War provided women with the opportunity to demonstrate their abilities and therefore earn them the vote. However, in various ways, it can be argued that the war was not the most important reason that gave them the vote; there are numerous other factors which should be discussed as well. Stressing the importance of women's war effort takes away from the impact which the pre-war women's movement had made. Sources C and D do not explicitly suggest that World War One was the 'key reason' for the enfranchisement of women in 1918. In fact, both sources imply that the NUWSS and the WSPU were largely responsible. According to source D, the calmer, yet more persistent methods of the NUWSS, or the suffragists, should not be underestimated: '...the NUWSS' transformation was one of the most significant developments in the suffrage movement...' Hence, the suffragists showed their determination and willingness to get the vote by simply using peaceful and persuasive tactics such as petitions, speeches and banners. ...read more.

I would say it is likely that other factors, which had started before the war, contributed to the 1918 vote more. Additionally, in my opinion, the idea of women being able to vote originated around the suffragettes. The suffragettes formed when no results were being achieved for women's rights. They relentlessly petitioned the Government and were impossible to ignore. Their violent tactics drew attention to the inequality between male and females. I consider that the calm and peaceful methods of the suffragists did also play an important role in women's rights. Yet, I think these tactics simply did not gain women the publicity that was necessary. Overall, I think that the pre-war suffrage movements established the fact that women were dissatisfied with the way society worked. The movements made men aware that women's rights had to be considered. If they had not existed, then it is unlikely that women would have been granted any vote at all; men would not have realised the importance of equality to women. Therefore, the NUWSS and particularly the WSPU provided the foundations on which women's rights could be built. I think that without them, the 1918 enfranchisement would not have happened. The statement indicates that war was the 'key reason' women got the vote. I consider that the First World War did help women get the vote, yet it did nothing more. There were more important reasons. ?? ?? ?? ?? ...read more.