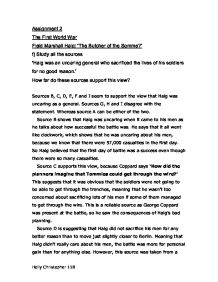 The First World War - Field Marshall Haig: The Butcher of the Somme?

Field Marshall Haig: ‘The Butcher of the Somme?’

f) Study all the sources

‘Haig was an uncaring general who sacrificed the lives of his soldiers for no good reason.’

How far do these sources support this view?

Sources B, C, D, E, F and J seem to support the view that Haig was uncaring as a general. Sources G, H and I disagree with the statement. Whereas source A can be either of the two.

Source B shows that Haig was uncaring when it came to his men as he talks about how successful the battle was. He says that it all went like clockwork, which shows that he was uncaring about his men, because we know that there were 57,000 casualties in the first day.  So Haig believed that the first day of battle was a success even though there were so many casualties.

Source C supports this view, because Coppard says ‘How did the planners imagine that Tommies could get through the wire?’  This suggests that it was obvious that the soldiers were not going to be able to get through the trenches, meaning that he wasn’t too concerned about sacrificing lots of his men if some of them managed to get through the wire. This is a reliable source as George Coppard was present at the battle, so he saw the consequences of Haig’s bad planning.

Source D is suggesting that Haig did not sacrifice his men for any better reason than to move just slightly closer to Berlin. Meaning that Haig didn’t really care about his men, the battle was more for personal gain than for anything else. However, this source was taken from a modern day comedy show and is an exaggeration. Therefore, it is not a particularly reliable source for supporting the statement, although there is some truth behind it.

Source E is another source written for entertainment purposes and not to inform. However, the comment ‘The absence of General, Sir,’ in answer to the question ‘What is the second difference (between a rehearsal and a real battle)?’ does support the view that Haig was uncaring. Even though it doesn’t refer directly to Haig, it does mention ‘The General’ and this cartoon was published in early 1917, it’s more than likely that it is making some direct reference to Haig.  This source was published in the British magazine, which suggests that many Britons agreed.

Source F is very anti-Haig. The writer, Laffin, describes Haig’s strategy as ‘criminal negligence’ and says that ‘he knew he had no chance of a breakthrough but still sent men to their deaths.’  It’s almost as if Laffin is saying that Haig was a murderer when he talks about ‘criminal negligence’, and he is also saying that Haig knew full well that he couldn’t win the battle, but he still sacrifices his men for no reason. Even though Laffin is biased in his writing he must have done a lot of research to write his book so it is reliable in that he will have been quite knowledgeable on the subject of the Somme when writing it, however it is opinionated and is not a very balanced text.

Source J is the final source that agrees with the statement. It says that ‘(the battle) was not responsible for the failure of the German effort to capture Verdun.  This offensive was already a failure.’ One of the main reasons that Haig ordered the attack on the Somme was that it was hoped that the battle of the Somme would draw German soldiers away from Verdun. However, Lloyd-George says that the battle of the Somme did not influence the situation at Verdun and that it was already a failure, meaning that Haig was putting his men in danger when it wasn’t necessary. Lloyd-George also says that ‘I expressed my doubts to General Haig…’ about this strategy. However, we know that Haig carried on with the attack after Lloyd-George had spoken to him. This shows that Haig not only had no respect for his superiors, but that he didn’t care about his men , as he was carrying on using tactics that the ‘Secretary for War’ had warned him would fail, although, Lloyd-George may simply have been ‘covering his back’ when he talks about this warning, as Haig is unable to argue this point. This source is very reliable, however is might be as reliable because he may have been concerned in protecting his reputation, as Lloyd-George not only knew a lot about military tactics, being Secretary for War, but actually witnessed part of the battle himself.

Source G does not mention if Haig was caring or not, but it contradicts the statement that Haig sacrificed his men for no good reason.  It says a lot of the ‘most experienced and most reliable [German] officers and men were no longer in their places’ and that ‘the confidence of the German troops in victory was no longer as great as before’.  This shows that even though a lot of British soldiers were lost, it had not been in vain, because the battle had quite a big negative impact on the Germans.  This is another very reliable source, as it is from an ‘official history’.  Also, the fact that this was written by the Germans makes it more reliable, because they will look at the battle with an indifference to Haig.  Also there is no reason to believe that this source is biased in any way, as the Germans are praising Haig’s tactics when it’s expected that they would do the opposite.

Source H states that Haig’s armies ‘had complete confidence in the leadership of their commander’.  This means that the army trusted Haig.  It is unlikely that they would trust him if he appeared to be uncaring about them, or if they thought that his tactics were doomed to failure. A general who fought in both wars wrote this source.  As he was an army general, his views may be biased in favour of Haig as he feels loyalty to other commanders.  However he has a lot of military experience so is likely to know what he’s talking about.

Source I is another source written by Lloyd-George, this extract from a letter to Haig. In this source, he says ‘I congratulate you most warmly on the skill with which your plans were laid’. This shows that from Lloyd-George’s point of view that Haig knew exactly what he was doing and that his tactics were having a positive effect, rather than Haig sacrificing his men with no gain. However, this source totally contradicts what Lloyd –George says in source J, which means that one of the sources is unreliable. It is more likely that source I is unreliable, because Lloyd-George may not have wanted to criticise Haig in the middle of the battle when he needed support, which would encourage him to praise Haig. Source J is far more likely to be reliable, as Lloyd-George would have no praise for Haig when writing in the 1930s.  Lloyd-George may have been criticising the war in Source J because it was popular to do so at the time, and as Lloyd-George was a politician, he is likely to have gone along with popular public opinion. However, Lloyd-George would have had more reason to stifle his opinions during the war than after it, and it is historical fact that Lloyd-George did not like Haig or approve of his methods, therefore source I is unreliable.

It could be argued that Source A agrees with the view that Haig was an uncaring General, as he seems to talk about being ‘prepared to see heavy casualty lists’ with no regret. However, it could also be argued that Haig was simply being realistic about war, and that he was trying to remain emotionally detached, instead of simply not caring about the lives of his men. Therefore source A does not support or disagree with the statement that Haig was uncaring and sacrificed his men for no good reason.

Most of the sources seem to support the statement that Haig was an uncaring General who sacrificed the lives of his soldiers for no good reason. Most of the sources are reliable and contain good evidence to support the statement and some are not as reliable, Laffin’s in particular (source F). Of the few sources that do disagree with the statement one of them is extremely unreliable. The source taken from the ‘German Official History’ is very reliable and states that Haig’s tactics were very successful from the Germans’ point of view, meaning that his men were not sacrificed for no reason. However, it doesn’t talk about whether or not he really cared about his soldiers, making these sources rather weak overall.