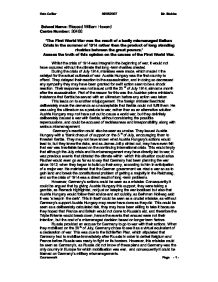 'The First World War was the result of a badly mismanaged Balkan Crisis in the summer of 1914 rather then the product of long standing rivalries between the great powers.'Assess the truth of this opinion on the causes of the First World War.

School Name: Blessed William Howard Centre Number: 30400 'The First World War was the result of a badly mismanaged Balkan Crisis in the summer of 1914 rather then the product of long standing rivalries between the great powers.' Assess the truth of this opinion on the causes of the First World War. Whilst the crisis of 1914 was integral in the beginning of war, it would not have occurred without the climate that long-term rivalries created. During the crisis of July 1914, mistakes were made, which made it the catalyst for the actual outbreak of war. Austria Hungary was the first country to offend. They delayed their reaction to the assassination, and in doing so decreased any sympathy they may have been granted for swift action seen to be a shock reaction. Their response was not issued until the 23rd of July 1914, almost a month after the assassination. Part of the reason for this was the Austrian prime minister's insistence that Serbia be served with an ultimatum before any action was taken. This leads on to another misjudgement. The foreign minister Berchtold deliberately made the demands so unacceptable that Serbia could not fulfil them. He was using the ultimatum as a prelude to war, rather than as an alternative solution. Austria Hungary may not have set out to cause a world war, but they definitely deliberately caused a war with Serbia, without considering the possible repercussions, and could be accused of recklessness and irresponsibility, along with serious mismanagement. ...read more.

The most important cause was Weltpolitik, the aggressive expansionist foreign policy pursued by Germany between 1890 and 1914. This was possibly designed to placate the public, who were dissatisfied at Germany's lack of an empire, which didn't accord with their increased economic power, and in doing so hopefully break the constitutional deadlock in the Reichstag. However, the policy was never a success, it was plagued by heavy handed methods mixed with uncertain aims, and often served only to increase European mistrust and suspicion of Germany. This in turn, made Germany more paranoid and increased their fear of encirclement, whilst bringing home their unpopularity. The first Moroccan crisis shows this effect. It occurred in the spring of 1909, when Germany over reacted to a French mission to Morocco, claiming the French were looking to make it a protectorate, and therefore damaging their commercial interests. However, the real motive behind the reaction is likely to have been a plan to weaken the Anglo French alliance, and make France realise she needed Germany, by putting France in a position where Britain would not support her. In this way, the crisis is linked to the alliance system, and the tension that this caused. However, despite Germany's unspoken threat of war and increased and sustained pressure on France, when an international conference was called Britain backed France all the way, strengthening the alliance rather than weakening it. ...read more.

Alternatively, it could be argued that the naval race which occurred between Britain and Germany until 1912 over Dreadnoughts soured relations between the countries considerably, and therefore increased the chances of war, and that the arms race which occurred between Germany, Russia, Austria Hungary and France did the same. Military Plans were also an issue, as although the Schlieffen Plan may not have been invented if it had not been for the existing problems, its existence meant that Germany had to declare war on Russian mobilisation, and therefore increased the possibility of a crisis turning into war. Equally, the fact that Russia's plans meant that partial mobilisation was impossible caused problems. It would seem that the First World War was a consequence of no one factor, or even one type of factor, long or short term, but instead the result of a culmination of many different long-term rivalries, which created a climate where war became possible, and dictated the actions of the great powers within the July 1914 crisis which amounted to mismanagement. As James Joll pointed out, every decision made concerning the crisis was restricted to some extent by previous events. Without the long-standing rivalries, there would have been no crisis, and without the crisis there would have been no war. Both factors were equally important, and the consequences inseparable. WORD COUNT PART A 530 WORD COUNT PART B 2356 TOTAL 2886 Kate Collier 09/05/2007 Mr. Stubbs Coursework Page - 1 - ...read more.