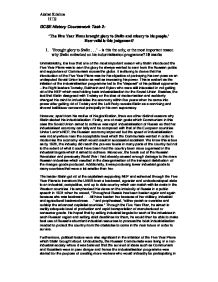 'The Five Year Plans brought glory to Stalin and misery to his people' - How valid is this judgement?

GCSE History Coursework Task 2: 'The Five Year Plans brought glory to Stalin and misery to his people.' How valid is this judgement? 1. 'Brought glory to Stalin . . .' - is this the only, or the most important reason why Stalin embarked on his industrialisation programme? 10 marks Unmistakably, it is true that one of the most important reason why Stalin introduced the Five Year Plans was to earn the glory he always wanted to earn from the Russian public and supporters of Communism across the globe. It is alluring to derive that his introduction of the Five Year Plans was for his objective of portraying his own pose as an undisputed Soviet Union leader as well as increasing his power. This is evident as the initiation of the industrialisation programme led to the "disposal" of his political opponents - the Right leaders Tomsky, Bukharin and Rykov who were still interested in not getting rid of the NEP which was holding back industrialisation for the Soviet Union. Besides, the fact that Stalin disagreed with Trotsky on the idea of modernisation and suddenly changed his mind to industrialise the economy within five years when he came into power after getting rid of Trotsky and the Left Party reveals Stalin as a conniving and shrewd trailblazer concerned principally in his own supremacy. However, apart from his motive of his glorification, there are other distinct reasons why Stalin started his industrialisation. Firstly, one of main goals which Communism in this case the Soviet Union aimed to achieve was rapid industrialisation of Russia so that her industrialised economy can tally and be compared with that of the European countries. Under Lenin's NEP, the Russian economy improved but the speed of industrialisation was not anywhere near the acceptable level which the Communists wanted in order to modernise the economy which would result in successful socialism. We know this is true as by 1926, the industry did reach the pre-war levels in many parts of the country ...read more.

Nevertheless, in this new programme, the concentration was not just on the heavy industries of coal, oil and iron but also to boost the mineral industry, communication and transport. We know this is true as the lead, tin and zinc industries intensified whereas many new canals and railways being built, the Moscow underground railway being the most magnificent centrepiece project. This further helped in reducing unemployment in Russia to such extent that foreign observers such as Dr Hewlett Johnson, Dean of Canterbury Cathedral began to believe that Russia has become a land "where none are employed" as there is such enthusiasm in the Soviet workers. Furthermore, by the late 1930s many Soviet workers had improved their conditions by acquiring well paid skilled jobs and earning bonuses for meeting targets. Under this second industrialisation programme Russia thrived to such a high degree that in 1940, there were more doctors per head of population in USSR than in capitalist countries like Britain. Moreover, the edification system improved immensely as schooling became free and compulsory for all types of people as Stalin started huge investments in the teaching methods based in colleges and in the workplace. Moreover, by the process of collectivisation, Stalin got enough grain to feed the hungry Soviet workers in the cities before the famine stuck. It was the result for this that the grain production excelled from 36 in 1921 to 95 in 1940. Stalin's goal of improving the agricultural Russia also meant that the machine tool industry also excelled as well as the huge improvement in modern chemical industry. This allowed the use of modern machinery such as tractors on the now collectivised farms which intensified the farm produces benefiting the Russian economy as these food bonuses were exported abroad for profit. Besides, people who were keen to work extra in the factories and in the various hydroelectric power plants did do well as they received better housing and salary and were not exposed to poverty and crowdedness to a very large extent. ...read more.

I believe what Stalin achieved for Russia during World Wide depression of the 1930s was absolutely spectacular - forceful heavy industries, new and contemporary machine tool industries, modern chemical industries, improved communication and transport as well as free education and medical system. 3. 'Brought misery to his people . . .' - in what ways did the Soviet people suffer? Is there any way in which life improved? 20 marks 4. What verdict would you give on the Five Year Plans? 10 marks MARKSCHEME Question 1 * INTRODUCTION - Is it true that the only and the most important reason why Stalin introduced the Five Year Plans was that he wanted to achieve glory. HOWEVER not the only way * The question is basically asking apart from the fact that it would glorify Stalin, what other reasons are there that got Stalin to start on his industrialisation programme known as the Five Year Plans. * CONCLUSION Don't you think there are several reasons that are important instead of just one reason being the most important one? Give your verdict - in your personal opinion which reason do you think is the main one and the most important one why Stalin introduced the Five Year Plans ? * Tip - include statistics and dates as well as Stalin's quotes in speeches (background knowledge) Question 2 INTRODUCTION - * The question is basically asking you apart from glorifying Stalin, what were the other achievements of the Five Year Plans? Tip - include statistics Nevertheless * Don't you think that there are other achievements of the Five Year Plan which are important rather than just the idea of Stalin's glorification? CONCLUSION - * Don't you think all the other achievements of the Five Year Plans play a significant role in describing the Five Year Plans as a successful scheme of improving USSR's economy? * Did it not infuse the element of prosperity and competitiveness in the Russian society * In your personal opinion which achievement do you think is the most important? Akshat Krishna 11TS ...read more.