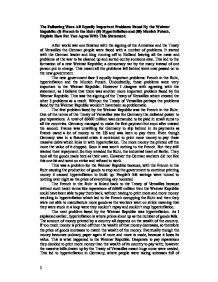 The Following Were All Equally Important Problems Faced By the Weimar Republic: (i) French in the Ruhr (ii) Hyperinflation and (iii) Munich Putsch. Explain How Far You Agree With This Statement.

The Following Were All Equally Important Problems Faced By the Weimar Republic: (i) French in the Ruhr (ii) Hyperinflation and (iii) Munich Putsch. Explain How Far You Agree With This Statement. After world war one finished with the signing of the Armistice and the Treaty of Versailles the German people were faced with a number of problems. It started with the German leader and king running off to Holland leaving all the mess and problems of the war to be cleaned up and sorted out by someone else. This led to the formation of a new Weimar Republic; a democracy ran by the many instead of one person put in charge. This meant all the problems left behind were now passed on to the new government. The new government face 3 equally important problems: French in the Ruhr, hyperinflation and the Munich Putsch. Undoubtedly, these problems were very important to the Weimar Republic. However I disagree with agreeing with the statement, as I believe that there was another more important problem faced by the Weimar Republic. This was the signing of the Treaty of Versailles which created the other 3 problems as a result. Without the Treaty of Versailles perhaps the problems faced by the Weimar Republic wouldn't have been so problematic. The first problem faced by the Weimar Republic was the French in the Ruhr. ...read more.

Eventually though the money becomes ordinary paper again if more and more is made, because it loses its value. This is what happened to the Weimar Republic. Desperate to pay reparations they decided to print more money than the wealth of its country to pay with; however the massive bills drawn up by the Treaty of Versailles meant huge sums were needed. This led to hyperinflation in Germany, where people were taking suitcases full of money to buy a loaf of bread and children were building houses out of their father's wages. People's life savings were crushed to nothing. As a result the money they were paying with became useless to anyone else as well. France wasn't going to stand for this and took matters into her own hands and invaded the Ruhr, where Germany produced most of its goods. However German workers and the government felt humiliated by this and went on strike against working to produce goods which would go straight into the hands of the French. This links with the Treaty of Versailles as the terms agreed on were to harsh on Germany. Out of the two so far, it seems that the French in the Ruhr seems to be the biggest problem faced by the Weimar Republic as the Treaty of Versailles led to hyperinflation which led to the French invading the Ruhr. ...read more.

In conclusion it seems the Weimar Republic was faced my many problem during its rein and it seems a miracle that they lasted for as long as they did. They were faced by rebellions, invasions and an economical shut down. Although theses point I listed were very crucial they are not, however the most important challenge faced by the Weimar Republic. I believe that the Treaty of Versailles was the most important problem as it spawned hatred towards the government even though they had no choice and had to sign the agreement they still paid a very heavy price for doing so. Without the treaty then there wouldn't have been the need to pay reparations, so they wouldn't have fallen behind and the French wouldn't have invaded causing the economic system to fail and hyperinflation to set in and finally there wouldn't have been the need to overthrow the government as they had not agreed to being fully at blame for causing world war one. Although if I had to choose one of the three as the most crucial I would pick the French in the Ruhr as my most important because it affected everyone by destroying the financial system which then led on to cause hyperinflation. So that meant that the government lost a lot more support and likeability as it had not managed to save peoples life savings and had not been able to do anything about the French controlling the Ruhr. 1 ...read more.