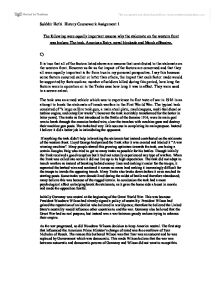 The following were equally important reasons why the stalemate on the western front was broken: The tank, American Entry, naval blockade and March offensive.

The following were equally important reasons why the stalemate on the western front was broken: The tank, American Entry, naval blockade and March offensive.

It is true that all of the factors listed above are reasons that contributed to the stalemate on the western front. However as far as the impact of the factors are concerned and that they all were equally important is far from true in my personal perspective. I say this because some factors occurred earlier or latter than others, the impact that each factor made would be supported by facts such as: number of soldiers killed during this period, how long the factors were in operation or in the Tanks case how long it was in affect. They were used to a severe extent.

The tank was an armed vehicle which was to experience its first taste of war in 1916 in an attempt to break the stalemate of trench warfare in the First World War. The typical tank consisted of “a large calibre tank gun, a main steel plate, machineguns, multi-fuel diesel or turbine engine, and caterpillar tracks” ( however the tank inevitably transformed for the better in latter years). The tanks as first introduced in the Battle of the Somme 1916, were its main goal was to break through the enemies barbed wire, clear the trenches with machine guns and destroy their machine gun posts. The tanks had very little success in completing its main purpose. Instead I believe it did a better job in intimidating the opponent.

If anything the tank didn’t help in breaking the stalemate but instead contributed on the stalemate of the western front. Lloyd George had praised the Tank after it was created and labeled it “A war winning machine”. Many people shared this growing optimism towards the tank, one being a certain Douglas Haig who tried to get as many tanks as possible for his battles. Though initially the Tank received a good reception but it had not actually experienced any type of warfare. When the Tank was called into action it did not live up to its high expectation. The tank did not adapt to trench warfare as instead of breaking behind enemy lines and making it easier for the troops, it separated the barbed wire and scattered it across no mans land making it increasingly difficult for the troops to invade the opposing trench. Many Tanks also broke down before it even reached its starting posts. Some tanks were demobilized during the midst of battle and therefore abandoned; many believe this was because of the rugged terrain. In conclusion the tank had a more psychological affect on helping break the stalemate, as it gave the home side a boost in morale and made the opposition fearful.

Initially Germany was neutral at the beginning of the Great World War. This was because President Woodrow Wilson had already signed a policy of neutrality. President Wilson had gained the reputation of an idealist who believed in world peace; therefore he believed the United State’s neutrality would influence other countries to end the war. Germany also believed that the Great War had no real purpose, but instead was a war between greedy nations trying to enhance their empire.

As the war progressed, so did Woodrow Wilsons decision to keep America neutral. The first step that influenced the American Prime Minister’s change of mind was the overthrow of Tsar Nicholas of Russia. The reason this bothered Wilson was that Tsar was an autocrat and he was replaced by Government which was democratic. This made Wilson believe that the war was between autocratic and democratic powers of Germany and Wilson did not want to accept this.

Another occurrence that influenced Woodrow Wilson’s change of mind was the Zimmermann telegram. The telegram was written by Zimmerman, the German minister. The telegram said the Kaiser had received information from his advisers that the policy of unrestricted submarine warfare would resume. Germany therefore feared this would push the United States out of neutrality and join the allies. Britain captured the telegram and copied it, and showed it to the United States. This did have to desired affect on the United States that England predicted as on the 6th of April the United States declared war.

The effect the American entry had on the Allies was a very positive one. The American entry obviously gave allies more troops and therefore and incredible boost in morale. Britain’s food supplies were running very short and therefore improved dramatically via the American entry in the war. With the increase of food, came the increase of money to improve Britain’s arsenal of weapons. The American Entry helped break the stalemate as increased man power resources on the allies had a huge physiological impact. In March 1918the allies had a forty percent man power advantage over the Germans. As you can see yet another factor was more affective physiologically then physically.

In my personal opinion the Allied blockade of German ports was the most important reason the stalemate on the western front broke. The blockade helped starve Germany into wanting the war to end quickly. The Allies could tell that the blockade was working as in Germany there was food riots and the German citizens where dying due to malnutrition. It came to no surprise then that German morale was low. This also had a big impact on trade for Germany. In conclusion the lack of resources severely weakened Germany and affected their fighting ability. The blockade also made Germany very desperate, making them resort to extraordinary things such as: In 1915, the German Government was forced to slaughter one third of all pigs because the naval blockade had cut off imports, the adult meat ratio for a week was very low and the blockade cut supplies of explosives for the German army.

The allied blockade of German ports had reached fever point as they found themselves starved of food, raw materials but most importantly the German population. These were difficult times for the German population; however the German soldiers weren’t letting this get to them as they had unveiled their shock troops, however the naval blockade took its toll on the German soldiers and the shock troops didn’t go as according to plan. They were starved of food when they were supposed to be attacking. While this was happening the Allies were planning a March Offensive.

The Allies had several countries following in Americas footsteps; Altogether the allies overwhelmed Germany and the rest of the triple entante. The United States had 600 tanks and therefore Germany was incredibly intimidated, they dropped out of the war by agreeing a armistice. Soon Turkey and Austria did the same, the war was all but won.

In conclusion, I would say the Allied blockade of German and the March offensive were the most important reasons for the stalemate to be broken. I say this because these events took place in a latter date in contrast to the other reasons. These reasons also in my opinion were the only reasons that affected Germany physically in comparison to the others which took a mental strain on the German soldiers.