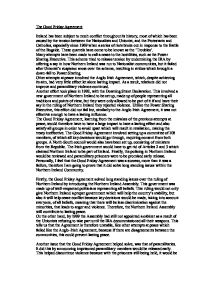 The Good Friday Agreement Ireland has been subject to much conflict throughout its history, most of which has been caused by the tension between the Nationalists and Unionist, and the Protestants and Catholics, especially since 1969 when a series of riots broke out in response to the Battle of the Bogside. These quarrels have come to be known as the 'Troubles'. Many attempts have been made to call a cease to the hostilities, such as the Power Sharing Executive. This scheme tried to release tension by undermining the IRA by offering a say in how Northern Ireland was run to Nationalist communities, but it failed after Unionist's suspicion arose over the scheme, resulting in strikes which brought a down-fall to Power Sharing. Other attempts at peace involved the Anglo Irish Agreement, which, despite achieving its aim, had very little effect let alone lasting impact. As a result, relations did not improve and paramilitary violence continued. Another effort took place in 1993, with the Downing Street Declaration. This involved a new government of Northern Ireland to be set up, made up of people representing all traditions and points of view, but they were only allowed to be part of it if and have their say in the ruling of Northern Ireland they rejected violence. ...read more.

Another issue that the Good Friday Agreement helped solve, was that of paramilitaries. It did this by announcing imprisoned paramilitary members would be released early. This helped discontinue violence because with the prisoners still being held, it would be impossible to move on, so in releasing the prisoners they were turning over new page and moving on from violence. The agreement also planned to decommission the weapons of the paramilitary forces, which would bring an end to the gun fights and bombings. However, to avoid paramilitary's humiliation, no lists or photos were to record what had been decommissioned. This aroused much suspicion of corruption and could have made a lot of people lose faith in the agreement, meaning it will not bridge the gap between the communities and therefore not solve the standing issues. As well as this, violence continued despite the decommissioning, with a series of bombings and shootings carried out by extremists from both sides who rejected the peace process, therefore I believe the Agreement did not manage to solve these problems. Security and policing was another issue that the Good Friday Agreement needed to address. Before the Good Friday Agreement, the RUC and the B-Specials were feared by much of the Nationalists as a result of their discriminative acts towards the Nationalist communities. ...read more.

Having said this, there were still plenty of people who were willing to fight for a full and separate Ireland, and these hardliners would carry on their violence to do this. Proof of this, was that however monstrous the bombings of Omagh and Enniskillen were, people were still hiding them, therefore the problem was not solved and lasting peace was still at question. In conclusion, I believe that the Good Friday Agreement has solved many of the long standing issues that have contributed to the troubles. Mainly, by putting an end to paramilitary violence by decommissioning their weapons and releasing the prisoners, which although may cause upset and anger in the short term, will lead to lasting peace in the long term. The other successful aspect to the agreement, was giving Northern Ireland a proper, stable and objective government, so key decisions could be made fairly and to the best effect, giving Northern Ireland lasting peace and prosperity. Having said this, there is still room for improvement, for example, firstly, and in my opinion most importantly, paramilitary violence must be discontinued by creating a fair and objective rule system, and in doing so taking away the reasons for bitterness between the communities and their reasons to use force. This will allow proper discussions to be carried out so all voices can be heard and considered in the decision making process, leading to a more peaceful and prosperous future. ...read more.