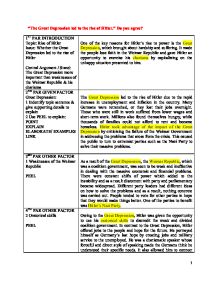 The Great Depression led to the rise of Hitler. Do you agree?

This caused the public to turn to extremist parties such as the Nazi Party to solve their massive problems. 3RD PAR OTHER FACTOR 1 Weaknesses of the Weimar Republic PEEL As a result of the Great Depression, the Weimar Republic, which was a coalition government, was seen to be weak and ineffective in dealing with the massive economic and financial problems. There were constant shifts of power which added to the instability and as a result discontent with party and parliamentary became widespread. Different party leaders had different ideas on how to solve the problems and as a result, nothing concrete was carried out. People tended to vote for other parties in hope that they would make things better. ...read more.

It also allowed him to connect with the German people in a seemingly sincere and honest manner. To the depressed and demoralized Germans, Hitler offered a vision of a confident, powerful Germany able to overcome its enemies at home and abroad. 5TH PAR CONCLUSION ==> Weigh the factors ==> State why Factor A is more important than factor B and C. In conclusion, the Great Depression is more important than the weaknesses of the Weimar Republic because it made the government come under criticism for failing to improve the situation. Seeing their government's failure in tackling the problems made many lose confidence in it. Thus, they turned to charismatic leaders like Hitler who could offer jobs and hope for a better future. Thus the Great Depression exposed the weaknesses of the Weimar Republic and allowed Hitler to win support. ?? ?? ?? ?? 1 ...read more.