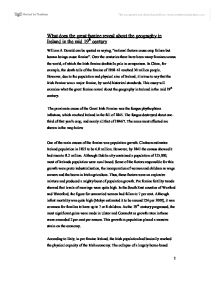 Emigration was the most obvious demographic reaction to the difficult economic circumstances in the pre famine decade. However, a rising emigration rate and a falling birth rate offered only partial relief to increasing population pressure. Added to that, demographic adjustment was weakest in the western and southern areas most at risk. The result of this was increasing dependence on the potato. By the 1840s, poverty had reduced one-third of the population to almost exclusive dependence on it for sustenance. Indeed, Ireland's moist climate gave it a comparative advantage in potato cultivation, and potato yields were high. Its importance in the Irish diet, coupled with an inadequate policy response from the authorities, made the consequences of repeated shortfalls in the 1840s devastating. The mortality statistics of the 1851 census show that the Irish famine killed about one million people, making it a major famine, by world-historical standards as stated earlier. A regional analysis of famine morality by Mokyr reveals that the excess death rate was least in east Leinster, Dublin and Northeast Ulster. The population before the famine was estimated at 8.2 million, according to the census. Between 1841-1851, the population fell by 20% to 6.5 million. The highest death rate occurred in Connacht with Mayo the most affected county of all. ...read more.

According to Donnelly, the contribution of Irish livestock to the British market rose by almost 20 per cent from 1850-1880. Thus, dependence on the potato declined in the Irish diet. However, the area worst hit by the famine, the West, records the least shift from tillage to pasture. Cormac O' Grada puts this down to the fact that the West proved less adept at increasing livestock investment because of the persistence of small farms and lack of capital. The switch to livestock led to a consolidation of agricultural holdings in the second half of the 19th century and the emergence of a self-confidant class of tenant farmers, within a transformed landlord system. In conclusion, the Great Irish Famine was one of the worst human disasters of the nineteenth century. Partial failures of the potato crop were nothing new in Ireland before 1845, but damage on the scale wrought by the ecological shock of potato blight was utterly unprecedented. It had a huge effect on the shaping of Irelands future. It had a major effect on Irish culture and led to a major decline in the Irish language. As stated earlier, it had an effect on Irish family life and heralded an age celibacy. This essay shown how the famine has shaped the geography of 19th century Ireland. ...read more.