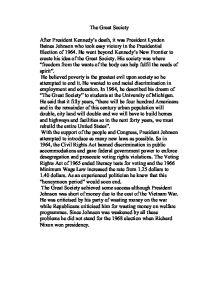 After President Kennedy’s death, it was President Lyndon Baines Johnson who took easy victory in the Presidential Election of 1964. He went beyond Kennedy’s New Frontier to create his idea of the Great Society. His society was where “freedom from the wants of the body can help fulfil the needs of spirit”.

He believed poverty is the greatest evil upon society so he attempted to end it. He wanted to end racial discrimination in employment and education. In 1964, he described his dream of “The Great Society” to students at the University of Michigan.  He said that it fifty years, “there will be four hundred Americans and in the remainder of this century urban population will double, city land will double and we will have to build homes and highways and facilities so in the next forty years, we must rebuild the entire Untied States”.

With the support of the people and Congress, President Johnson attempted to introduce as many new laws as possible. So in 1964, the Civil Rights Act banned discrimination in public accommodations and gave federal government power to enforce desegregation and prosecute voting rights violations. The Voting Rights Act of 1965 ended literacy tests for voting and the 1966 Minimum Wage Law increased the rate from 1.25 dollars to 1.40 dollars. As an experienced politician he knew that this “honeymoon period” would soon end.

The Great Society achieved some success although President Johnson was short of money due to the cost of the Vietnam War. He was criticised by his party of wasting money on the war while Republicans criticised him for wasting money on welfare programmes. Since Johnson was weakened by all these problems he did not stand for the 1968 election when Richard Nixon won presidency.