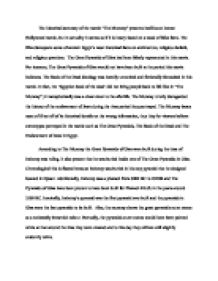 The historical acuracy of the film &quot;The Mummy&quot;

The historical accuracy of the movie "The Mummy" presents itself as an honest Hollywood movie, but in actuality it seems as if it is heavy based on a mask of false facts. The film disrespects some of ancient Egypt's most historical facts on architecture, religious beliefs, and religious practices. The Great Pyramids of Giza had been falsely represented in this movie. For instance, The Great Pyramids of Giza would not have been built at the period this movie indicates. The Book of the Dead ideology was heavily unnoticed and fictionally fantasized in this movie. In fact, the 'Egyptian book of the dead' did not bring people back to life like in "The Mummy"; it metaphorically was a cheat sheet to the afterlife. The Mummy utterly disregarded the history of the enslavement of Jews during the time period they portrayed. ...read more.

Ironically, Imhotep's pyramid was the first pyramid ever built and the pyramids in Giza were the last pyramids to be built. Also, the mummy shows the great pyramids outer stones as a noticeably brownish colour. Factually, the pyramids outer stones would have been painted white at that around the time they were created and to this day they still are still slightly evidently white. The book of the dead representation in The Mummy was that it brings people back to life after they died. But, it is evident that it's really a guide to the afterlife. The book actually contained spells, passwords, mathematical equations, symbols, and important information for the dead in their afterlife. The movie invented the book of Amun Ra and never explained it purpose its was entirely fictional. ...read more.

Also, when Eve was talking about the Hom-Dai, she assumed that if the a spirit woke they would bring out the 10 plagues of Egypt. The enslavement and freeing of the Jews took place after the time of Imhotep, so it would be unrealistic that the Egyptians prophesized these events taking place thousands of years in advance. Obviously, there are aspects of The Mummy that ring false to historical ancient Egyptian times. The Mummy is bases most of its historical details on the wrong information, thus they let viewers believe stereotypes portrayed in the movie such as the about The Great Pyramids, The Book of the Dead and The Enslavement of Jews in Egypt. In conclusion, although not bad film, The Mummy fails to accurately portray the major aspects of Egyptian beliefs and historical connections ties to religion and architecture. WORLD HISTORY MOVIE REVIEW ESSAY By: orko Bronson For Ms. r ?? ?? ?? ?? ...read more.