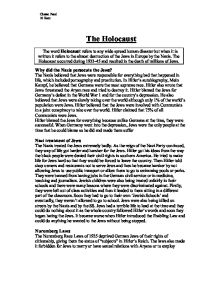 The Holocaust The word Holocaust refers to any wide spread human disaster but when it is written it refers to the almost destruction of the Jews in Europe by the Nazis. The Holocaust occurred during 1933-45 and resulted in the death of millions of Jews. Why did the Nazis persecute the Jews? The Nazis believed that Jews were responsible for everything bad that happened in life, which included pornography and prostitution. In Hitler's autobiography, Mein Kampf, he believed that Germans were the most supreme race. Hitler also wrote that Jews threatened the Aryan race and tried to destroy it. Hitler blamed the Jews for Germany's defeat in the World War 1 and for the country's depression. He also believed that Jews were slowly taking over the world although only 1% of the world's population were Jews. Hitler believed that the Jews were involved with Communists in a joint conspiracy to take over the world. Hitler claimed that 75% of all Communists were Jews. Hitler blamed the Jews for everything because unlike Germans at the time, they were successful. When Germany went into the depression, Jews were the only people at the time that he could blame so he did and made them suffer Nazi treatment of Jews The Nazis treated the Jews extremely badly. As the reign of the Nazi Party continued, they way of life got harder and harsher for the Jews. ...read more.

Ghettos Jews were expelled from their homes, and from towns and villages where their families had lived for generations. Carrying items of their past lives with them, they were marched or shipped in freight cars to the ghettos. Many died on the way from hunger, exhaustion, or murder. The first ghetto was set up in the city of Lodz, Poland. The order establishing it made it clear that this was only one step toward the Nazis' final goal. The order came from SS Brigadier General Friedrich Uebelhoer. Ghettos were located in the oldest, most run-down sections of town. The buildings were in bad condition, often near collapse. Where running water and sanitary facilities existed, the overcrowding soon made them break down. The ghetto in Lodz was a little over 1.5 miles square, the size of about twenty city blocks. Approximately 150,000 Jews lived seven or eight to a room. The crowding was so intense that each person had about seven feet to call his or her own, a space "as narrow as the grave". Most of the ghettos were enclosed. Fences or barbed wire surrounded some. Others were enclosed by a wall, which the Jews had to pay a German firm to build. Concentration Camps Concentration Camps were first used by the British in South Africa in 1899. Hitler and the Nazis used this idea and made seven major camps which were: Dachau, Sachsenhausen, Buchenwald, Auschwitz, Flossenb�rg, Mauthausen, and, for women only, Ravensbr�ck. ...read more.

Just one of these camps were able to kill around 16,000 people a day and in some larger death camps such as Treblinka, around 25,000 deaths in a day could take place. Around 18 million people were sent to death camps and historians estimate that up to 11 million people were exterminated. Death Camps contained Gas Chambers, which were used to kill many people. People were sent here if they were disliked or they slacked off in Concentration Camps. Before people went to Death Camps, they had no idea where they were going. They were told that were going to have showers. Gas Chambers Gas was one method that the Nazis used to exterminate people quickly. Many Jews were tricked into going into Gas Chambers. They were told that they were going to be bathed or showered. Once they were in the chambers, they thought that they would be having a shower but instead of water coming from the pipes, it was Carbon Monoxide gas, which is poisonous to the human body. Auschwitz was the biggest extermination camp. Located in Southern Poland, it consisted of many gas chambers. People were ordered to take of their clothes. This made people feel that they were actually going into a shower room. But instead they were showered with Hydrogen Cyanide- this gas worked much quicker for killing people than Carbon Monoxide. Here is a table of how many Jews were killed in Extermination camps. ?? ?? ?? ?? Chetan Patel 10 Kent ...read more.