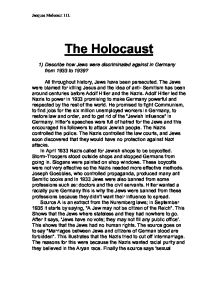 The Holocaust 1) Describe how Jews were discriminated against in Germany from 1933 to 1939? All throughout history, Jews have been persecuted. The Jews were blamed for killing Jesus and the idea of anti- Semitism has been around centuries before Adolf Hitler and the Nazis. Adolf Hitler led the Nazis to power in 1933 promising to make Germany powerful and respected by the rest of the world. He promised to fight Communism, to find jobs for the six million unemployed workers in Germany, to restore law and order, and to get rid of the "Jewish influence" in Germany. Hitler's speeches were full of hatred for the Jews and this encouraged his followers to attack Jewish people. The Nazis controlled the police. The Nazis controlled the law courts, and Jews soon discovered that they would have no protection against Nazi attacks. In April 1933 Nazis called for Jewish shops to be boycotted. Storm-Troopers stood outside shops and stopped Germans from going in. Slogans were painted on shop windows. These boycotts were not very effective so the Nazis needed more effective methods. Joseph Goebbles, who controlled propaganda, produced many anti Semitic books and In 1933 Jews were also banned from some professions such as: doctors and the civil servants. Hitler wanted a racially pure Germany this is why the Jews were banned from these professions because they didn't want their influence to spread. Source A is an extract from the Nuremberg laws; in September 1935 it starts by saying, "A Jew may not be citizen of the Reich". This Shows that the Jews where stateless and they had nowhere to go. After it says, 'Jews have no vote; they may not fill any public office'. This shows that the Jews had no human rights. The source goes on to say "Marriages between Jews and citizens of German blood are forbidden". This illustrates that the Nazis tried to cut off intermarriage. ...read more.

The fact that the SS man was ordering the people with a dog whip shows how low the Nazis thought the Jews were. Throughout the whole experience of being killed by the Einsatzgruppen the Jews remained strong. "Without weeping or crying these people undressed and stood together in family group embracing each other and saying goodbye." This shows that even though the Jews had to go through a great ordeal of pain and suffering they still remained strong. The German Builder explains that he "...watched a family of eight. An old woman with snow white hair held a one year old baby. The father held a ten year old baby". This shows that the Nazis didn't see any shame in what they were doing and they didn't mind killing innocent children. Next the source says "I walked to huge mass grave. There were about 1,000 bodies, so tightly packed that only their heads were visible. The people, completely naked climbed down steps and stopped at the spot indicated by the SS man. They lay down. Then I heard a series of rifle shots. I looked into the grave and saw bodies contorting." The fact that there were 1,000 bodies would have meant that at least 1,000 bullets would have had to be used and this sort of killing were happening every day. This was a great problem for the Nazis because the ammunition which was being used by the Einsatzgruppen was needed for the war. This is when the Nazis realized that they needed a better solution. They decided on "The Final Solution". On 31 July 1941, Goering (the Economics Minister) ordered Himmler and Heydrich (an SS general) to carry out the "final solution "to the "Jewish Question" in Europe. Shooting (carried out by the Einsatzgruppen) and the ghettos were seen as inefficient ways of killing millions of people, so modern industrial methods were brought in. ...read more.

Different Methods were going to be used on different kind of Jewish people. Such as the young and the fit would go through a process called 'destruction through work' which was a method planned to kill Jews by making them build other material that would also be used to kill other Jews such as Concentration Camps. Although The Ghettoes might seem like a place designed for the Jewish people to live in it was also a source for cheap labour and a concentration camp in disguise. The conditions were made so bad that the Jewish people would risk dying when trying to escape. In the months following the Wannsee Conference, the Nazi party continued to carry out their plans for the "Final Solution." Jews were "deported" -- transported by trains or trucks to six camps, all located in occupied Poland: Chelmno, Treblinka, Sobibor, Belzec, Auschwitz-Birkenau, and Majdanek-Lublin. The Nazis called these six camps "extermination camps." Most of the deportees were immediately murdered in large groups by poisonous gas. The Nazis used gassing as their preferred method of mass murder because they saw it as "cleaner" and more "efficient" than shooting. Gassing also spared the killers the emotional stress many squad members had felt shooting people face to face. The killing centres were, isolated areas, moderately well hidden from public view. They were located near major railroad lines, allowing trains to transport hundreds of thousands of people to the killing sites easily. The deportations required the help of many people and all parts of the German government. The victims in Poland were already imprisoned in ghettos and totally under German control. The deportation of Jews from other parts of Europe, however, was a far more complex problem. The German foreign minister was successful in persuade German occupied nation to assist in the deportations. The introduction of the Auschwitz extermination camp meant that the Jews could be killed efficiently. Unlike other death camps which were build solely to kill Jews, the Auscwitz death camp had a work camp attached. ?? ?? ?? ?? Jacques Malecaut 11L ...read more.