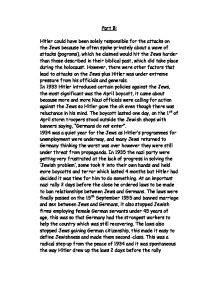 The Holocaust - How responsible was Adolf Hitler?

Part B: Hitler could have been solely responsible for the attacks on the Jews because he often spoke privately about a wave of attacks (pogroms), which he claimed would hit the Jews harder than those described in their biblical past, which did take place during the holocaust. However, there were other factors that lead to attacks on the Jews plus Hitler was under extreme pressure from his officials and generals. In 1933 Hitler introduced certain policies against the Jews, the most significant was the April boycott, it came about because more and more Nazi officials were calling for action against the Jews so Hitler gave the ok even though there was reluctance in his mind. The boycott lasted one day, on the 1st of April storm troopers stood outside the Jewish shops with banners saying, "Germans do not enter". ...read more.

At an important nazi rally 2 days before the close he ordered laws to be made to ban relationships between Jews and Germans. The laws were finally passed on the 15th September 1935 and banned marriage and sex between Jews and Germans, it also stopped Jewish firms employing female German servants under 45 years of age, this was so that Germany had the strongest workers to help the country which was still recovering. The laws also stopped Jews gaining German citizenship, this made it easy to define Jewishness and made them second-class. This was a radical step up from the peace of 1934 and it was spontaneous the way Hitler drew up the laws 2 days before the rally closure. ...read more.

This shows that Hitler was mainly in control because he could just call of the Jewish attacks when he wanted to although he was being pushed and pushed by party leaders all the time. Between 1937 and 1938 aryanisation stepped up in Germany, the Aryan race was Hitler's ideal people they were the blonde hair blue eyes theory and he often spoke of aryanisation at rally's and it featured a lot in propaganda. Goring who had been put in charge of the 4 year plan to get Germanys economy ready for war turned his attention to aryanisation at the Jews who still had some economic control, this meant he would buy out Jewish firms or confiscating their belongings, this only occurred in 1937 because the Jewish businesses had been needed up until then to help the German economy and rearmament programme. ...read more.