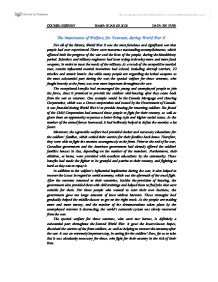 The Importance of Welfare, for Veterans, during World War II

The Importance of Welfare, for Veterans, during World War II For all of the history, World War II was the most ferocious and significant war that people had ever experienced. There were numerous outstanding accomplishments, which affected both the progress of the war and the lives of the people, during the bloodthirsty period. Scientists and military engineers had been trying to develop more and more fatal weapons, in order to meet the needs of the military. As a result of the competitive martial race, certain influential martial inventions had existed, including aircraft carriers, V2 missiles and atomic bombs. But while many people are regarding the lethal weapons as the most substantial part during the war, the special welfare for those veterans, who fought bravely at the front, was even more important throughout the war. ...read more.

The found of the CMH Corporation had aroused those people to fight for their country, as well as given them an opportunity to pursue a better living style and higher social status. As the number of the armed forces increased, it had indirectly helped to defeat the enemies a lot faster. Moreover, the agreeable welfare had provided shelter and necessary educations for the soldiers' families, which settled their worries for their families back home. Therefore, they were able to fight the enemies courageously at the front. Prior to the end of the war, Canadian government and the American government had already offered the soldiers' families houses in size, depending on the number of the members. ...read more.

These strategies had gradually helped the middle-classes to get on the right track. As the people are making more and more money, and the number of the demonstrations taken place by the unemployed veterans is decreasing, the world's economic system was slowly recovered from the war. The special welfare for those veterans, who were our heroes, is definitely a substantial part throughout the Second World War. It gave the lower-classes hopes, dissolved the worries of the front soldiers, as well as helping to recover the economy after the war. It was an extremely important step, in caring for the soldiers' lives, for us to take. But it was absolutely necessary for those, who fight for their country in the risk of their lives. ?? ?? ?? ?? COURSE: HISTORY NAME: GUAN JIE XUE DATE: 2011/3/28 ...read more.