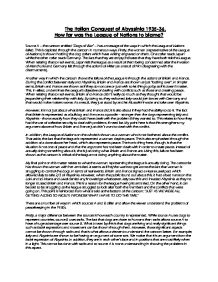 The Italian Conquest of Abyssinia: How far was the LoN to blame?

The Italian Conquest of Abyssinia 1935-36. How far was the League of Nations to blame? Source A - the cartoon entitled "Dogs of War" - has a message of the ways in which the League of Nations failed. This is depicted through the cartoon in numerous ways. Firstly, the woman (representative of the League of Nations) is shown holding the dog collars which have writing engraved on them. One collar reads Japan while the other collar reads Germany. The fact that they are empty indicates that they have both left the League. When relating that to real events, Japan left the league as a result of them being condemned after the invasion of Manchuria and Germany left through the actions of Hitler (as a result of him disagreeing with the disarmaments). Another way in which the cartoon shows the failure of the League is through the actions of Britain and France. During the conflict between Italy and Abyssinia, Britain and France are shown as just "looking over". In simpler terms, Britain and France are shown as if they do not care or just wish to let things go by as if it doesn't matter. This, in effect, undermines the League's objective of dealing with conflicts such as those and creating peace. When relating that to real events, Britain and France didn't really do much as they thought that would be jeopardising their relationship with Italy. By doing so, they reckoned Italy would join forces with Germany and that would make matters worse. As a result, they just stood by and let Mussolini invade and take over Abyssinia. However, it is not just about what Britain and France did; it is also about if they had the ability to do it. The fact that Britain is represented as a bulldog and France as a poodle - stronger than the dogs representing Italy and Abyssinia - shows exactly how they could have dealt with the problem if they wanted to. ...read more.

The way I perceive it to be - from what I have learnt/my own knowledge - is that Britain didn't care about Abyssinia all that much as it didn't concern them much. In other words, the consequences of them being invaded didn't really concern affairs with Abyssinia; it just really concerned Italy's power and what they were going to do next. And so, firstly, this is backed up by source D (from my point earlier). Despite the fact that Anthony Eden was a "weird" man and the provenance could cause unreliability, I feel source E isn't any better. Source E states that Britain (in the LoN) will help Abyssinia and does not tolerate bullying but that is not actually how I feel about the matter. From previous cases, such as the one of Manchuria, the League only condemned Japan and did not act in terms of collective security. And, although Samuel Hoare was talking to the public, can he really be trusted after the pact opposing the Covenant? I think not... There are numerous ways in which sources F & G agree and likewise in ways they disagree. Source F shows an old man on the verge of exiting a small house. He is holding something that is emitting light and the cartoonist has done this to emphasise the fact that the old man/LoN is living in the dark. What can actually be done in the dark is limited and so the cartoonist is trying to show the viewer that the LoN is limited to what it can do. What's more, the LoN is made out to be an old man. When referring something to an old man, the point being made is that it is slow and feeble. So the cartoonist's point here is that the LoN was slow and feeble. A further way in which the cartoonist is critical of the LoN is through the use of the Italian soldier. ...read more.

That assistance has been constantly refused me", Haile is otherwise saying that the league has its limits to what it can do. In addition to those points, Haile says that the problem is bigger than the aggression of Italy; it is the existence of the LoN. Despite the fact that it is saying that the league in existence is causing all the problems, it is also showing how Italy were also to blame for the conquest. Finally, source H is yet another speech by Benito Mussolini, whereby he says that; if the league had imposed oil bans, he would have halted the invasion. This is critical of the league as it gives me the message that the league should have taken the risk. However, it can also be said that the league was unaware of how to deal with Mussolini or how he would react to the oil ban. Ultimately in this essay, I feel that the sources go very far in proving that the LoN was to blame for the Mussolini conquest. All but 3 of the sources agree with my conclusion and, despite there are even 3, they can all be counter-argued. Firstly, source C shows how ruthless Mussolini was. However, the League of Nations collectively was stronger than him and could deal with whatever he threw (it was more of the fact that they could not be bothered). As a matter of fact, Britain and France on their own could deal with the likes of Mussolini and so the argument for Italy's aggression now seems small. Secondly, source E talks about how the league was meant to deal with issues like unprovoked aggression. However, the fact that Samuel Hoare's character is questionable (after the Hoare-Laval pact) alongside him talking to the LoN (wants to say good things about it) makes me wonder whether this source actually counts. And thirdly, despite the League were unaware of how Mussolini was going to react to the ban, I feel that it should have taken the risk in doing so nevertheless as it had nothing to lose; it had already lost its reputation... ...read more.