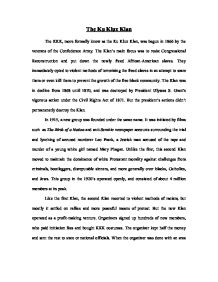 The KKK, more formally know as the Ku Klux Klan, was begun in 1866 by the veterans of the Confederate Army. The Klan’s main focus was to resist Congressional Reconstruction and put down the newly freed African-American slaves. They immediately opted to violent methods of terrorizing the freed slaves in an attempt to scare them or even kill them to prevent the growth of the free black community. The Klan was in decline from 1868 until 1870, and was destroyed by President Ulysses S. Grant's vigorous action under the Civil Rights Act of 1871. But the president’s actions didn’t permanenetly destroy the Klan.

In 1915, a new group was founded under the same name. It was initiated by films such  as The Birth of a Nation and anti-Semitic newspaper accounts surrounding the trial and lynching of accused murderer Leo Frank, a Jewish man accused of the rape and murder of a young white girl named Mary Phagan. Unlike the first, this second Klan moved to maintain the dominance of white Protestant morality against challenges from criminals, bootleggers, disreputable sinners, and more generally over blacks, Catholics, and Jews. This group in the 1920’s operated openly, and consisted of about 4 million members at its peak.

Like the first Klan, the second Klan resorted to violent methods of racism, but mostly it settled on rallies and more peaceful means of protest. But the new Klan operated as a profit-making venture. Organizers signed up hundreds of new members, who paid initiation fees and bought KKK costumes. The organizer kept half the money and sent the rest to state or national officials. When the organizer was done with an area he organized a huge rally, often with burning crosses and perhaps a ceremonial presentation of a Bible to a local Protestant minister. He left town with all the money.

The KKK at this time held extreme political power as it rose from  the southern states up into the Midwest and even Canada. They “controlled” various states such as Tennessee, Indiana, Oklahoma, and Oregon in addition to some of the Southern legislatures. Klansmen would elect a fellow member in a high government position and he woul in return take fellow Klansmen into government positions. However, the state made sure that they didn’t exert much influence into the government, with exceptions to laws in Oregon designed to banish Catholic parochial schools.. No major national politician claimed membership, and no major newspaper supported the Klan; in fact, most newspapers strongly opposed it and stated it was hostile to American values.

This second Klan didn’t last because it had no staying power. The organizers would collect the money and immediately leave town without leaving themselves a budget or building their power. The Klan’s collapse took place in different states at different times. A memorable account is of a scandal involving David Stephenson, the Grand Dragon of Indiana and fourteen other states, who was convicted of the rape and murder of Madge Oberholtzer in 1925. Since the Klan claimed to stand for morality, this shattered its credibility. After such scandals, the Klan eventually withered away, but it still exists in out society today. Although there are only a couple thousand members, the Klan still exists, mostly in the southern states, and continues to strive for what they believe is right.