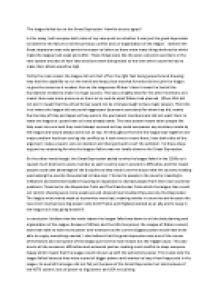 The League of Nations failed due to the Great Depression How far do you agree?

﻿?The league failed due to the Great Depression? How far do you agree? In this essay I will compare both sides of my view point on whether it was just the great depression to blame for the failure or all the previous conflict and un-organisation of the league. I believe the Great depression was only partly the reason to failure as there were many things before this which made the league look weak and suffer. These things were like the poor economic sanctions or the veto system and also of how slow decisions were being made so the time other countries had to make their attack would be high. Firstly the main reason the league did not start off on the right foot being powerful and showing they had the capability to run the world and keep piece was that America did not join the league to give the resources it needed. ...read more.

The veto system meant when people like Italy went into win land they could always succeed as they could overpower any decisions made by the league and would always come out on top. All throughout the time the league was together one major problem had been sorting the conflicts as it took time to travel there, hear both sides of the argument, make a report, vote on decision and then get back to sort the problem. So these ideas support my reasoning for why the leagues failure was not totally down to the Great Depression. On the other hand though, the Great Depression added to why the league failed in the 1930s as it caused much distress to every member as each country was in economic difficulties and this meant people could take advantage of the discipline as they would use the excuse that the country invading was helping the country they wanted to take over. ...read more.

Because if Wilson and the USA has joined, the League of Nations would have been able to have more power over everyone as the current biggest power would have been able to supply everything needed. I also believe that the great depression was one of the causes of the failure and corruption of the league just not the main reason but the trigger cause. This was due to all the economic difficulties and extremist parties creating much conflict to keep everyone happy which meant that the league could not put up with the extremists power. This is also why the league failed because they were scared of bigger powers and wanted to keep them happy and in the league. So overall the league did not fail just because of the Great Depression but also because of the VETO system, lack of power to big powers and USA not joining. ...read more.