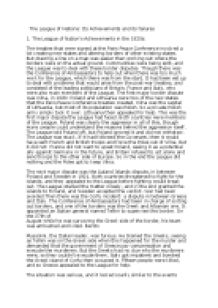 The League of Nations: Its achievements and its failures

﻿The League of Nations: Its Achievements and its failures 1. The League of Nation?s Achievements in the 1920s: The treaties that were signed at the Paris Peace Conference involved a lot creating new states and altering borders of other existing states. But drawing a line on a map was easier than working out where the borders were on the actual ground. Communities were being split, and the League was to deal with these border disputes. Though there was the Conference of Ambassadors to help out when there was too much work for the League, which there was from the start. It had been set up to deal with problems that would arise from the post-war treaties, and consisted of the leading politicians of Britain, France and Italy, who were also main members of the League. The first major border dispute was Vilna, in 1920: Poland and Lithuania were two of the new states that the Paris Peace Conference treaties created. Vilna was the capital of Lithuania, but most of its population was Polish. So a private Polish army simply took it over. Lithuania then appealed for help. This was the first major dispute the League had faced. Both countries were members of the League. Poland was clearly the aggressor in all of this, though many people could understand the reasons behind the aggression itself. The League told Poland off, but Poland ignored it and did not withdraw. The League was stuck. If it had followed the Covenant, then it would have sent French and British troops and force the Poles out of Vilna. But it did not: France did not want to upset Poland, seeing it as a potential ally against Germany in the future, and Britain refused to act alone and send troops to the other side of Europe. So in the end the League did nothing and the Poles got to keep Vilna. ...read more.

The civilian government in Japan ordered the Japanese army to withdraw, but the instructions were ignored. It became clear that the Japanese army and not the civilian government was in control of Japanese foreign policy.China appealed to the League of Nations, but Japan claimed it was not invading as an aggressor, but invading to settle a local difficulty. The Japanese argued that they hat to invade in self-defense to keep peace in the area as China was in such a state of anarchy. Japan was a leading member of the League. This was a serious test for it. There was a long and frustrating delay during which the Leaugue representatives sailed around the world to deal with the crisis and make a report.was only by September 1932 that they presented it. It said that Japan had acted unlawfully and that Manchuria should be returned to China or that it should be governed by League. Instead, in February 1933, Japan did the opposite: it announced that it was to invade more of China in ?self-defense?. The report from the League?s officials was approved on the 24th of February with 42 votes to 1 in the Assembly. Only Japan had voted against it. In response to the insult, Japan left the league on the 27th of March, and the next week invaded Jehol. The League was powerless. Economic sanctions would be meaningless without the USA, Japan?s main trading partner. Also, Britain was more intent on keeping good relations with Japan rather than agreeing on sanctions. The League also discussed banning arms sales with Japan but none of the members could even agree on that. They were worried that Japan might retaliate and the war would escalate. And the idea of either Britain or France using their navies or armies against Japan was not even brought up. Only the USA or the USSR would have had the resources to remove the Japanese by force from Manchuria, and they weren?t even members of the League. ...read more.

In December 1935, while sanctions were still taking place, the French and British Foreign Ministers, Laval and Hoare, were making a plan that aimed to give Mussolini two thirds of Abyssinia in exchange for calling off the invasion.But, details were leaked to the French press of the plan before it had been put forward. It proved disastrous for the League, Haile Selassie demanded an immediate League debate about it. It was seen as a blatant act of treachery against the league in both Britain and France. But the real damage was to the sanction discussions, which lost all momentum, further delaying the question about banning oil sales. In February the committee concluded that if they did stop oil sales to Italy, the Italian supply would dry up in 2 months, but it was too late by then: Mussolini had already taken over most of Abyssinia, and the Americans were even more disgusted with the dealings of the French and British than they had been before and blocked a move to support the League?s sanctions. American oil producers actually stepped up their exports to Italy. The final and fatal blow to the League came on the 7th of March 1936: Hitler marched his troops into the Rhineland, a direct violation of the Treaty of Versailles. Any hope of French support on the sanctions against Italy were now dead, as the French were now desperate to gain the support of Italy against Germany, and were prepared to give Abyssinia to Mussolini. Yet Italy continued to ignore the League?s orders and by May 1936 had taken the capital of Abyssinia. On the 2nd of May, Haile Selassie was forced into exile, and on the 9th, Mussolini formally annexed the entire country. The League watched all of this helplessly. Collective security had turned out to be an empty promise. The League of Nations had failed.All hopes of the British and French handling of the crisis strengthening their position against Hitler proved wrong. In November 1936, Mussolini and Hitler signed their own agreement called the Rome-Berlin Axis. ...read more.