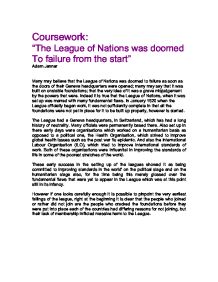 &quot;The League of Nations was doomed to failure from the start&quot; - discuss.

Coursework: "The League of Nations was doomed To failure from the start" Adam Jenner Many may believe that the League of Nations was doomed to failure as soon as the doors of their Geneva headquarters were opened; many may say that it was built on unstable foundations; that the very idea of it was a grave misjudgement by the powers that were. Indeed it is true that the League of Nations, when it was set up was marred with many fundamental flaws. In January 1920 when the League officially began work, it was not sufficiently complete in that all the foundations were not yet in place for it to be built up properly, however is started. The League had a Geneva headquarters, in Switzerland, which has had a long history of neutrality. Many officials were permanently based there. Also set up in there early days were organisations which worked on a humanitarian basis as opposed to a political one, the Health Organisation, which strived to improve global health issues such as the post war flu epidemic. ...read more.

Russia Russia was not allowed to join the League of Nations due to a deep fear of communism amongst some of the key members of the league. Also like America a vast country with mineral wealth and industrial capabilities. However unlike America Russia was right there in Europe, and bordering Germany it posed a serious threat to all of Europe as no country was particularly aligned with them. Keeping them out of the League of Nations was another fundamental flaw. Germany Not having Germany in the League of Nations at the beginning is perhaps one of the greatest mistakes of their set-up. Already by then Germany had had no say in the Treaty of Versailles, and having no say in an organisation which was attempting to bring the world closer together instead of pushing countries further apart. By not being a member great resentment of the league grew up in Germany and this can be tied to the rise of Nazism. ...read more.

He looked south to become a great Mediterranean power. Back in 1890 Italy had lost an army in Abyssinia, now Ethiopia so he once again entered Ethiopia with Armoured cars and aircraft, which annihilated the horseback units of the Abyssinian army. Both countries were members of the League, the leader of Abyssinia protested to the League, they placed a trade embargo upon Italy, however did not include oil within the embargo; this meant that the Italians could continue their occupation. Also in the 1930's came the aggression of Japan, not wishing to be seen as some poor merely agricultural country, which could be crushed by any western power, they streamlined themselves and built up industry and an army. They sent military forces into the Chinese territory of Manchuria and captured it. Again the league was protested to, a vote within the league came to 13-1 against however because Japan was a senior council member nothing was done about it. Again the weaknesses of the League were shown. These were basically the defeating blows struck to the league. In the years that followed Nazism and Fascism grew up unchecked. ...read more.