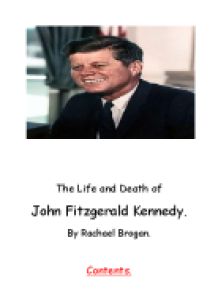 The life and death of J.F.K

﻿The Life and Death of John Fitzgerald Kennedy. By Rachael Brogan. Contents. 1. Introduction. 2. Family. 3. Childhood. 4. Early Adulthood. 5. Congressional Career. 6. Jacqueline Lee Bouvier. 7. 1960 election. 8. Presidency. 9. Assassination. 10. Lee Harvey Oswald and the Warren Commission. 11. Other Conspiracy Theories. 12. Conclusion. 13. Bibliography. Introduction. Hi, I?m Rachael Brogan and I am going to be writing this investigation on the life and death of John Fitzgerald Kennedy, the 35th President of the USA. Kennedy was born on the 29th of May 1917 in Brookline, Massachusetts, Boston. He became President in 1960 and died on the 22nd of November 1963. JFK led a very interesting and eventful life and some of the topics I am going to cover are, his family life, his political career, his presidency and of course his assassination and some of the possible conspiracy theories. I hope that in reading my investigation you find out lots of information about Kennedys life and understand the interest I have in him. I hope you enjoy my investigation. The Family of JFK. John or Jack as he was called by family and friends was born into an Irish-American family. He was the second child of Joseph Kennedy Sr. and Rose Fitzgerald. He had one older brother at this time, Joseph Kennedy Jr. He also had 7 younger brothers and sisters, Rosemary Kennedy, Kathleen Kennedy, Eunice Kennedy, Patricia Kennedy, Robert Kennedy (known as Bobby), Jean Kennedy and Edward Kennedy. Joseph Kennedy, who was the ambassador for America was a self-made millionaire who had made his money by having illegal alcohol shipped in and selling it. He expected his children to do well and didn?t tolerate failure, so much so that because the third Kennedy child Rosemary was slightly ?ditsy? and didn?t achieve as much as the other Kennedy children, her father took her for a lobotomy when she was 23 years old. ...read more.

When Kennedy took over he allowed the plan to go forward in April 1961, but tried to reduce US involvement. The result was a fiasco, as the invasion force was slaughtered and any survivors taken prisoner, the American Warships watched, helplessly from a few miles out to sea. The Bay of Pigs invasion (named after the ill-fated landing area) was a disaster for the US?s image overseas. President Kennedy took full responsibility for what happened. The USSR?s leader Khrushchev, who saw America as a ?threat? to the Soviet Union saw this as a chance to probe America for weakness, authorized the construction of Soviet missile bases in Cuba, from which, the entire United States could be threatened with attack. When JFK was presented with pictures of these missiles he held out for a peaceful settlement but on October 22nd, he announced that a United Stated naval and air quarantine would be put around Cuba to stop any more missiles from the Soviet Union to be put in Cuba. He also demanded that the Soviets remove any and all nuclear weapons already in place. So began the Cuban Missile Crisis, in which the world teetered on the verge of a nuclear war. Khrushchev claimed he was only protecting Cube from an invasion from the US, and then suggested that his missiles might be removed if the US were to remove their missiles in Turkey, just across the Black Sea from the Soviet Union. On Wednesday, October the 24th, Russian ships that had been steaming towards Cuba turned back. A week later, an agreement had been struck; Khrushchev would remove the missiles from Cuba and the US would remove the missiles from Turkey. This was called the Cold War. The Cold War was not the only part of JFK?s foreign policy, one of JFK's first initiatives was the creation of the Peace Corps, a service organization that sent young Americans overseas to do volunteer work in less-developed countries. ...read more.

In addition, some say the bullet would have had to change course to pass through the Governor as well as the President the way it did. 3. Some researchers have claimed that the CIA are to blame for the assassination saying that CIA leader, David Atlee Phillips, was working with Maurice Bishop who was part of Alpha 66, an organization of anti-Castro Cubans. Alpha 66?s founder, Antonio Veciana, claims that during one of his meetings with Bishop, Lee Harvey Oswald was attending. 4. According to author, James Douglass, Kennedy was assassinated because he was turning away from the Cold War and seeking a peaceful agreement with the Soviet Union which Douglass argues, ?was not the kind of leadership the CIA, the Joints Chiefs of Staff and the military industrial complex would have wanted in the White House.? 5. With the 1959 Cuban Revolution that brought Fidel Castro to power, thousands of Cubans left their homeland to take up residence in the United States. Many exiles hoped to overthrow Castro and return to Cuba. Their hopes were dashed with the failed Bay of Pigs Invasion in 1961, and many exiles blamed President Kennedy for the failure. 6. Mafia criminals may have wished to retaliate for increasing pressure put upon them by Bobby Kennedy (who had increased by 12 times the number of prosecutions under President Dwight Eisenhower). Documents never seen by the Warren Commission have revealed that some Mafia members were working very closely with the CIA on several assassination attempts of Fidel Castro. Conclusion. To conclude, I think JFK was a great man who had the potential to be a great leader of America and it was a great shame he never got to show this potential. However, I do see the side of JFK that might have lead others not to trust him. I believe that Lee Harvey Oswald didn?t work alone in the assassination of JFK. I have thoroughly enjoyed learning about JFK and have developed a great interest in his life. I hope you found my investigation interesting and I hope it provided enough information. Thank you for reading it. ...read more.