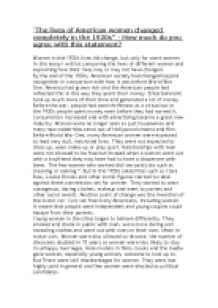 &quot;The lives of American women changed completely in the 1920s&quot; - How much do you agree with this statement?

﻿"The lives of American women changed completely in the 1920s" - How much do you agree with this statement? Women in the 1920s lives did change, but only for some women. In this essay I will be comparing the lives of different women and explaining how their lives may or may not have changed. By the end of the 1920s, American society had changed beyond recognition in comparison with how it was before World War One. America had grown rich and the American people had reflected this in the way they spent their money. Entertainment took up much more of their time and generated a lot of money. Before the war, people had seen thriftiness as a virtue but in the 1920s people spent money even before they had earned it. ...read more.

It meant that people were independent and young couples could escape from their parents. Young women in the cities began to behave differently. They smoked and drank in public with men, wore more daring and revealing clothes and went out with men on their own, often in motor cars. Women were also allowed to divorce; the number of divorcees doubled in 15 years as women were less likely to stay in unhappy marriages. Role models in films, books and the media gave women, especially young women, someone to look up to. But There were still disadvantages for women. They were less highly paid in general and few women were elected as political candidates. The mass availability of the car helped to ?fuel? the economic boom, making travel much easier and more flexible and it also allowed the American people to go further and see more. ...read more.

These women were left to get on with their lives as normal. Working extremely hard for very little pay, while the wealthy women in the cities partied and lead luxurious lives. Black women?s lives in the 1920s also did not change much, as these women did not share in the economic boom at this time. These women were forced to work hard for poor wages, as most of the decent jobs were given priority to the white women. The Ku Klux Klan continued to make their lives worse, by rasist movement such as burning black schools and such like. Black womens only options for earning good wages was dancing or singing in clubs, which was entertainment for white people. Most aspects of American culture and society changed for Women in the 1920s due largely to the new state of mind that resulted from America?s wealth. By Caitlin Watson 10X ...read more.