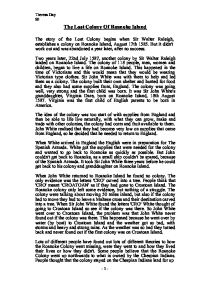 The Lost Colony Of Roanoke Island

The Lost Colony Of Roanoke Island The story of the Lost Colony begins when Sir Walter Raleigh, establishes a colony on Roanoke Island, August 17th 1585. But it didn't work out and was abandoned a year later, after no success. Two years later, 22nd July 1587, another colony by Sir Walter Raleigh landed on Roanoke Island. The colony of 118 people, men, women and children, began to live a life on Roanoke Island. This happened in the time of Victorians and this would mean that they would be wearing Victorian type clothes. Sir John White was with them to help and led them as a colony. The colony built their own shelter and hunted for food and they also had some supplies from, England. The colony was going well, very strong and the first child was born. It was Sir John White's granddaughter, Virginia Dare, born on Roanoke Island, 18th August 1587. Virginia was the first child of English parents to be born in America. The idea of the colony was too start of with supplies from England and then be able to life live naturally, with what they can grow, make and trade with other colonies, the colony had corm and fruit available to them. ...read more.

When Sir John White found the letters 'CRO' White thought of going to Croatoan Island so see if the colony was there. So John White went over to Croatoan Island, the problem was that John White never found out if the colony was there. This happened because he went over by water (by boat) to Croatoan Island and the weather got so bad, with storms and heavy and strong rains. As the weather was so bad they turned back and never found out if the first colony was on Croatoan Island. Lots of different people have found out lots of different theories to how the Roanoke Colony went missing, were they went to and how they lived their lives or how they didn't. Some people believe that the Roanoke Colony went up northwards to what is owned by the Chespian Indians. People thought that the colony stayed on the Chespian Indians land for up to 20 years. All this is what is thought to be true and then after the 20 years Powhatan, the father of Pocahontas ordered the Chespian Indians and the English colony to be destroyed. ...read more.

The colony knew that there was the possibility of being attacked and were afraid of this. But there were no traces of a massacre, but if three years had passed then nature would have taken change. Another theory that could be put forward is that; The Spanish were in Florida and they were planning to attack the English colony after White had left for England. The officials in St. Augustine had planned all this. The Spanish governor send a boat over to America to locate where the English colony was, so they were ready to attack at anytime. They only found evidence of English occupation and they saw a harbor that was in use at the time. This attack got postponed and never took place. But for all we know they could have attacked the colony while Sir John White was in England. The colony's enemies were the Roanoke Indians as the colony was taking over their territory of the Roanoke Indians. The colony of Roanoke Island swapped food with the Croatoan Indians, but then the Croatoan Indians wouldn't swap their food with the colony any more. I think that the first theory about the colony going to Croatoan Island is the more believable. Theresa Day 90 - 2 - ...read more.