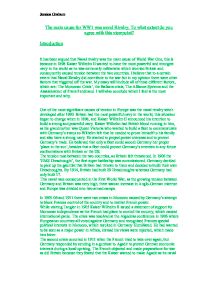 The main cause for WW1 was naval Rivalry. To what extent do you agree with this viewpoint?

The main cause for WW1 was naval Rivalry. To what extent do you agree with this viewpoint? Introduction It has been argued that Naval rivalry was the main cause of World War One, this is because in 1898 Kaiser Wilhelm II wanted to have the most powerful and strongest navy in the world as he was extremely militaristic which worried Britain and consequently caused tension between the two countries. I believe that to a certain extent that Naval Rivalry did contribute to the war but in my opinion there were other factors that triggered off the war. My essay will include all of these different factors, which are: The Moroccan Crisis', the Balkans crisis, The Alliance Systems and the Assassination of Franz Ferdinand. I will also conclude which I feel is the most important and why. One of the most significant causes of tension in Europe was the naval rivalry witch developed after 1990. Britain had the most powerful navy in the world, this situation began to change when in 1898, and Kaiser Wilhelm II announced his intention to build a strong and powerful navy. Kaiser Wilhelm had British blood running in him, as his grandmother was Queen Victoria who wanted to build a fleet to commensurate with Germany's status so Wilhelm felt that he needed to prove himself to his family and also have a strong navy. ...read more.

It is though that this made Austria too confident. And encouraged it to make trouble with Serbia AND Russia. Russia resented being faced down in 1909. It quickened its arms build up. It was determined not to back down again. From 1912 to 1915 there was a series of local wars. Serbia emerged from these as the most powerful country ion the Balkans. This was a serious issue for Austria. Serbia had a strong army and it was a close ally of Russia. Austria decided that Serbia would have to be dealt with. By 1914 Austria was looking for a good excuse to declare war on Serbia. Austria opportunity came with the murder of Archduke Franz Ferdinand and his wife Sophie. Although there was no hard evidence the Princip was acting under orders from the Serbian government, Austria blamed Serbia. It gave Serbia a ten point ultimatum that would effectively have made Serbia part of the Austrian empire. The Serbs could not possibly accept it. When the Serbs asked for time to consider, Austria refused and declared war on 28 July 1914. The Serbs were then angry at Austria for not giving them time to consider so this definitely causes tension between the countries. ...read more.

France had been defeated by Germany in a short war in 1870. Since then Germany had built up a powerful army and strong industries. France was worried about the growing power of Germany France had also developed a strong and close friendship with Russia. Its main concerns were to protect itself against attack by Germany and to get back the rich industrial region of Alsace-Lorraine, which Germany had taken from it in 1870. Russia was by far the largest of all six countries but also the most backward. The country was almost entirely agricultural. Russia shared worries about the growing power of Germany with Britain and also had a long history of rivalry with Austria-Hungary so joined with Britain and France in the Triple entente. Conclusion In conclusion to my essay, it can be seen throughout that Naval rivalry was not the only cause for the war as all the different events created immense tension, which contributed to WW1. In my opinion Naval rivalry was the strongest point that contributed to the war but I feel that the other points were also very strong and caused anxiety between the six powers. As there was so much tension and so many different points, with so much talk of war and plans for war at that time, I feel that war was in fact inevitable. Jessica Graham ...read more.