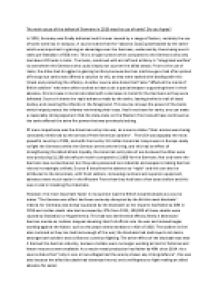 The main cause of the defeat of Germany in 1918 was the use of tanks? Do you agree?

Transfer-Encoding: chunked ﻿The main cause of the defeat of Germany in 1918 was the use of tanks? Do you Agree? In 1918, Germany was finally defeated and this was caused by a range of factors, certainly the use of tanks were key in doing so. A source states that the ?advance [was] spearheaded by the tanks? which was important in gaining an advantage over the Germans, evidenced by there being over 6 tanks per Battalion of 500 men. This is a huge number when compared to the Germans who only had about 20 tanks in total. The tanks, combined with aircraft and artillery in ?integrated warfare? to overwhelm the Germans who could simply not counter the allied attack. Prior to the use of tanks, the Allies had struggled in gaining territory because German machine-guns had often picked off troops but tanks now offered a solution to this, as they were tasked with dealing with this threat and protecting the infantry. ...read more.

Of more importance was the American entry into war, as a source states ?their armies were being constantly reinforced by the arrival of fresh American soldiers?. The USA was arguably the most powerful country in 1914, and with their entry 1.8 million American troops were in Europe ready to fight the Germans whilst the German armies where tiring, and this had an effect of strengthening the allied attack. Equally, the American entry also of use because the Allies were now producing 11,200 aircraft per month compared to 2,000 for the Germans. Not only were the Germans now outnumbered, but they also possessed less materials and weapons making German victory increasingly unlikely. Source B describes the advance as ?rapid? and this can also be attributed to the Americans, with fresh soldiers, increasing numbers and superior equipment, advances were much easier in the Western Front than they had been a few years before and this was crucial in breaking the stalemate. ...read more.

The other effect of the blockade was that it harmed the German industry, because civilians were no longer working as hard in factories and fewer resources were available. As a result metal production had fallen by 40% since 1914. As a source states that ?only in one or two villages had the enemy shown any strong defence?, this was also because the allied blockade had destroyed moral, and a willingness to fight making an allied advance far easier. In conclusion I think that the blockade was the major cause of the defeat of Germany because it restricted German industry and made civilians and soldiers lose hope as food shortages led people to despair, as source D shows. Whilst tanks and American involvement were significant, I think that the blockade had already rendered Germany close to breaking. American involvement and tanks simply sped up the immanent break through that was made possible because of the blockade. ...read more.