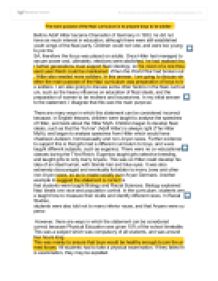 The main purpose of the Nazi curriculum was to prepare boys to be soldiers. Do you agree?

The main purpose of the Nazi curriculum is to prepare boys to be soldier Before Adolf Hitler became Chancellor of Germany in 1933, he did not have as much interest in education, although there were still established youth wings of the Nazi party. Children could not vote, and were too young to join the SA; therefore the focus was placed on adults. Once Hitler had managed to secure power and, ultimately, elections were abolished, he had realised that further generations must support Nazi ideology, so his vision of a one thousand year Reich could be maintained. When the World War had broken out, Hitler also needed more soldiers. In this answer, I am going to discuss whether the main purpose of the Nazi curriculum was preparation of boys to be soldiers. ...read more.

This was so Hitler could develop his idea of an ideal human, with blonde hair and blue eyes. It was also extremely discouraged and eventually forbidden to marry Jews and other non-Aryan races, so as to create racially pure Aryan Germans. Another example to suggest the statement is correct is that students were taught Biology and Racial Sciences. Biology explained Nazi ideals onn race and population control. In the curriculum, students were taught how to measure their skulls and identify different races. In Racial Studies, students were also told not to marry inferior races, and that Aryans were superior. However, there are ways in which the statement can be considered correct because Physical Education was given 15% of the school timetable. This was a subject which was compulsory of all students, and was around four hours long. ...read more.

Therefore, in answer to the question of whether the main purpose of the Nazi curriculum was to prepare boys to be soldiers, it would seem that the statement is mostly incorrect. This is because children were heavily educated, both subliminally and obviously, in Nazi idealogy. This was among the curriculum, in most subjects. For example, an English essay could be to analyse one of Hitler's speeches. History textbooks had glorifed past victories of Germany, and had indoctrinated students with the idea that the only reason Germany had lost World War One was because the Jews had set them up, which further increased the amount of propaganda against Judaism. The Nazi curriculum also included Biology and Racial Sciences, which taught students that Aryans were superior and not to marry other 'inferior' races. Girls were also taught Eugenics, which taught selective breeding with other Aryans. ...read more.

The author stays focused on the question throughout and evidently has strong knowledge about the content of Nazi lessons. They do well to consider girls' as well as boys' education and they reach a firm conclusion, although their evidence should perhaps have led them to be more balanced. 4 out of 5 stars.