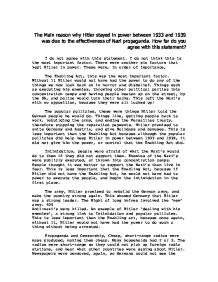 The Main reason why Hitler stayed in power between 1933 and 1939 was due to the effectiveness of Nazi propaganda. How far do you agree with this statement?

The Main reason why Hitler stayed in power between 1933 and 1939 was due to the effectiveness of Nazi propaganda. How far do you agree with this statement? I do not agree with this statement. I do not think this is the most important factor. There were another six factors that kept Hitler in power. These were, in order of importance, The Enabling Act, this was the most important factor. Without it Hitler would not have had the power to do any of the things we now look back on in horror and disbelief. Things such as executing his enemies, throwing other political parties into concentration camps and having people beaten up on the street, by the SA, and police would turn their backs. ...read more.

People thought it was better to support the Nazi's than live in fear. This is less important that the Enabling Act, because if Hitler did not have the Enabling Act, he would not have had to power to execute the people, and begin the intimidation in the first place. The army, Hitler promised to rebuild the German army, and make the country strong again. This showed Germany that Hitler was a strong leader. The Night of long knives involved the 'new' army. 400 Anti-nazi's were killed. An example of Hitler 'dealing with his enemies', a strong link to Intimidation and popular pollicies. This is less important than the Enabling act, because once again, without it, Hitler would not have had the power to do such a thing without being arrested. ...read more.

This was not true. This is not very important at all, because it wasn't what kind of person Hitler was that would keep him in power. It was what he was going to do for Germany that mattered to the majority of people. Indoctrination, German school books were indoctrinated and manipulated to make German children believe Jews were evil. This was not relative at the time. Indoctrination was a long term plan, to turn the future generations of Germany in to Nazi men and women, with Nazi ideologies. In conclusion, I think the most important factor was the Enabling Act. Because with out it, Hitler would not have had the power, or authority to act out any of the other factors. If Hitler did not have the Enabling Act, he would certainly not have been in power during 1933 and 1939. ...read more.