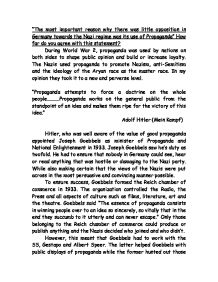 &quot;The most important reason why there was little opposition in Germany towards the Nazi regime was its use of Propaganda&quot;

"The most important reason why there was little opposition in Germany towards the Nazi regime was its use of Propaganda" How far do you agree with this statement? During World War 2, propaganda was used by nations on both sides to shape public opinion and build or increase loyalty. The Nazis used propaganda to promote Nazism, anti-Semitism and the ideology of the Aryan race as the master race. In my opinion they took it to a new and perverse level. "Propaganda attempts to force a doctrine on the whole people...........Propaganda works on the general public from the standpoint of an idea and makes them ripe for the victory of this idea." Adolf Hitler (Mein Kampf) Hitler, who was well aware of the value of good propaganda appointed Joseph Goebbels as minister of Propaganda and National Enlightenment in 1933. Joseph Goebbels saw he's duty as twofold. He had to ensure that nobody in Germany could see, hear or read anything that was hostile or damaging to the Nazi party. While also making certain that the views of the Nazis were put across in the most persuasive and convincing manner possible. ...read more.

Books that taught or went against the Nazi ideals were burnt in public. The Nazi censors also burned the books of Helen Keller, who had overcome her deafness and blindness to become a respected writer; told of the book burnings, she responded: "Tyranny cannot defeat the power of ideas." .In addition all plays and literature had to conform to Nazi belief and ideals, otherwise they were not published, performed or shown. Film was a medium the Germans used very effectively for propaganda purposes. The Nazis made sure that they controlled the film industry; they decided what films were produced and released. The films released to the German public usually focused on certain areas. Such as: the Jews - portraying them as vermin; sub-human and unworthy of life, the greatness of Hitler, the way of life for a true Nazi especially the children. Leni Riefenstahl was a woman Hitler had a great respect for and she was given a free hand to produce Nazi propaganda films. At no time up to 1933, did the Nazi party win an election by a majority of votes. They therefore, needed to convince those who opposed them that they were the better party and that there really was no other choice. ...read more.

This was way more than any other team that participated in the Olympic activities. Hitler was very displeased, upset and angry about the wonderful performance of Jesse Owens. He was an American athlete, who took part in and came out triumphant in the 100-meter dash, the 200-meter dash and the broad jump. He was also a key member of the 400-meter relay team that won the Gold Medal. In all but one of these events Jesse set Olympic records. Jesse was the first American in the history of Olympic Track and Field to win four gold medals in a single Olympics. Jesse was black and so inferior according to Nazi racial theories, yet he was the star of the Olympic Games. He won 4 four gold medals also breaking eleven world records. Hitler, obviously, refused and wouldn't shake hands with a man who was not only Black but also in excellent physical condition, showing and proving to the Nazi racial theory to be complete nonsense. German propaganda was extremely important to the course of World War II. By taking control of the media and only printing or broadcasting Nazi material, the Reich was able to effectively flood Germany with its propaganda. This, combined with the genius of men like Joseph Goebbels, created one of the most potent barrages of wartime propaganda in history. ...read more.