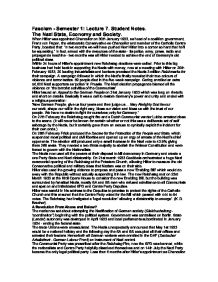 The NaziState, Economy and Society.

Fascism - Semester 1: Lecture 7. Student Notes. The Nazi State, Economy and Society. When Hitler was appointed Chancellor on 30th January 1933, as head of a coalition government, Franz von Papen, the aristocratic Conservative ex-Chancellor and member of the Catholic Centre Party, boasted that: 'In two months we will have pushed Herr Hitler into a corner so hard that he'll be squeaking.' In fact, armed with the resources of the state - its police, army, press, radio and propaganda machine - two months was all Hitler needed to achieve the end of Germany's old political class. Within 24 hours of Hitler's appointment new Reichstag elections were called. Prior to this big business had held back in supporting the Nazis with money, now at a meeting with Hitler on 20th February 1933, 20 leading industrialists and bankers promised the Nazis 3 million Reichmarks for their campaign. A campaign followed in which the Nazi's finally revealed their true colours of violence and terror tactics. 69 people died in the five week campaign. Goring enrolled an extra 50,000 Nazi supporters as 'police' in Prussia. The Nazi election propaganda blamed all the violence on 'the terrorist activities of the Communists'. Hitler issued an Appeal to the German People on 31st January 1933 which was long on rhetoric and short on details. Basically it was a call to restore Germany's power and unity and ended with a religious peroration: 'Now German People, give us four years and then judge us.....May Almighty God favour our work, shape our will in the right way, bless our vision and bless us with the trust of our people. We have no desire to fight for ourselves; only for Germany.' On 27th February the Reichstag caught fire and a Dutch Communist vander Lubbe arrested close to the scene. (It will never be known for certain whether or not this was a deliberate act of self sabotage by the Nazis, but it certainly gave them an excuse to cynically exploit the incident for their own ends.) ...read more.

And even then individual industrialists were left a considerable degree of freedom to operate their businesses. Relations between the nazi elite and big business were generally good. They benefited greatly from the smashing of the independent unions in 1933. They also benefited from the destruction of Jewish owned firms and the redistribution of the their plant and property. The state sponsored and rearmourment and expansion of the economy particularly benefited the primary producers - and in return they tolerated increasing state intervention in setting targets for production. 'Profits went above all to the industrialists who were prepared to collaborate actively with the regime. (Hinden, Republican and Fascist Germany, 1996, p. 129) Daimler Benz's new aeroplane factories were actually built by the state and its production levels rose by over 800 per cent from 1932-1941. The chemical company IG Farben and the Krupp steel company gained huge dividends by this course of action. IG Farben received over 50 per cent of government investment after 1936 to produce synthetic oil and rubber substitutes. By 1943 it owned 334 plants and was a major part of the war planning effort. But there was a price to pay. Farben produced the gas for the extermination camps and by 1943 had half its labour force in forced labour camps in the eastern territories. Under the 1936 Four Year Plan, Goering forced the reluctant steel barons to invest 130 million marks in the 400 million mark project to build the Reichwerk Hermann Goering (RWHG) - in effect creating a rival. In response to their criticisms Goering threatened to charge them with sabotage. By 1939 the RWHG was the largest industrial firm in Europe - producing coal, synthetic fuels, heavy machinery as well as steel. Some became disenchanted by the state intervention. Fritz Thyssen, the iron and steel magnate, fled to Switzerland in 1939 arguing that 'Soon Germany will not be any different from Bolshevik Russia.' ...read more.

and by 1939 70% of households had such a radio receiver. Loudspeakers were located in public places - and places of work and 'radio wardens' appointed to make sure that only the proper programmes were listened to. He also nationalised most of the German press and amalgamated all the news agencies into the state run DNB. finally he introduced the daily press conference at the ministry to give 'guidance' to editors about how to deal with the news. Just how effective this was to become is revealed in the campaign towards the end of the war to fight on to the end (Total War Campaign) which was orchestrated by Goebbels and led to the German people sacrificing their economy and society in the name of Nazism. CONCLUSIONS. Social Reaction or Social revolution? Difficult to construct a balance sheet of social change in Nazi Germany (Kershaw, p132.) Nazism certainly destroyed working class organizations and reshaped class relations in favour of employers. It made inroads in many aspects of German society in a radical 'modernising' manner (Kershaw, p 135) For Ralph Darrendorf Nazism completed the retarded social revolution in Germany which both the Kaiser Reich and Weimar Republic had failed to do. (Society and Democracy in Germany, 1968). A view supported by D. Shoenbaum, Hitler's Social Revolution, 1968) It did so by destroying the old social patterns and norms of peasant and family life and the innate Conservatism of German society. Tradition links between class and status in Germany were destroyed by Nazism. This was an unintentional outcome of the Nazi state. Kershaw states that the Nazi state did not produce a 'social revolution either objectively or subjectively in the minds of its citizens. Nazism attempted to alter people's values and belief systems and this was a long term goal thwarted by war and the regimes destruction. Nazism did not fundamentally alter class relationships but it did pave the way for the post-war Modernisation of German society. Nazism was 'a parasitic growth on the old social order' (Kershaw, p149) It never achieved a totalitarian Nazification of the German economy and society. ...read more.