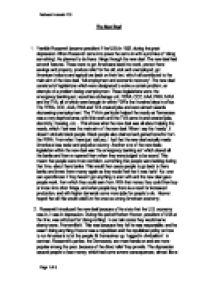 The New Deal. I completely agree with the comment the New Deal was not a complete success. However, I will not go as far as saying that it was a failure.

The New Deal 1. Franklin Roosevelt became president if the USA in 1932, during the great depression. When Roosevelt came into power he came in with a promise of 'doing something'. He planned to do these things through the new deal. The new deal had several features. These were to get Americans back into work, protect there savings and property, produce relief for the old, sick and unemployed, get American Industry and agriculture back on their feet, which all contributed to the main aim of the new deal, 'full employment and economic recovery'. The new deal consisted of legislations which were designated to solve a certain problem, an example of a problem being unemployment. These legislations were; the emergency banking act; securities exchange unit; FERA; CCC; AAA; PWA; NIRA and the TVA, all of which were brought in within FDR's first hundred days in office. The FERA, CCC, AAA, PWA and TVA created jobs and were aimed towards decreasing unemployment. The TVA in particular helped the needy as Tennessee was a very deprived area, with little work until the TVA came in and created jobs, electricity, housing, etc.... This shows what the new deal was all about helping the needy, which I feel was the main aim of the new deal. ...read more.

Whereas when the new deal was going, if someone were to be unemployed they would receive help and benefits. So the new deal changed the views of American citizens. It also changed the way in which minority groups were treated, an example being black Americans. The benefits that were handed out through the new deal were not only for white people. Matter of fact there were some legislations that were designated for black/Indian/etc... People. The Indian reservations act, is an example of this, allowed native Americans to freely preserve and practice their religion. Unfortunately, Roosevelt could not pass through a law that would get rid of lynching of black Americans. This was because he felt he needed voted and if he wouldn't get re-elected had he passed this legislation. This links to another statement that I feel is true, which is that the new deal wasn't actually given to the people. I feel that that the people only ever got 3/4 of the new deal, while the other quarter was blocked of by the Republican owned Supreme Court. This was because in order for a legislation to be active it has to go through congress first and because they were against the new deal they blocked off many of the new deal's plans. ...read more.