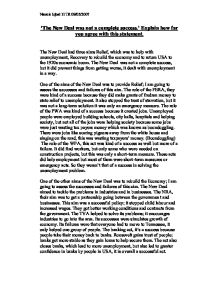 The New Deal was not a complete success.' Explain how far you agree with this statement.

'The New Deal was not a complete success.' Explain how far you agree with this statement. The New Deal had three aims Relief, which was to help with unemployment, Recovery to rebuild the economy and to return USA to the 1920s economic boom. The New Deal was not a complete success, but it did prevent things from getting worse, it dealt with unemployment in a way. One of the aims of the New Deal was to provide Relief; I am going to assess the successes and failures of this aim. The role of the FERA, they were kind of a success because they did make grants of fredren money to state relief to unemployment. It also stopped the treat of starvation, but it was not a long-term solution it was only an emergency measure. The role of the PWA was kind of a success because it created jobs. Unemployed people were employed building schools, city halls, hospitals and helping society, but not all of the jobs were helping society because some jobs were just wasting tax payers money which was known as boondoggling. There were jobs like scaring pigeons away from the white house and singing on the road, this was wasting taxpayers' money. ...read more.

So here the New Deal did control unemployment but did not solve it so it is kind of a success. Another one of the New Deal aims was the aim to create a fairer society. The NRA act and Wagner act both helped the workers to earn rights to join trade unions and to bargain collectively for their wages. The relationships between workers, government and businesses, made them join trade unions. The strikes that took place, 80 percent of them went in favour of the workers. The New Deal backed the workers and Roosevelt sympathises to their cause. This act was a success but the problems were that workers made more demands; workers go on strike, production in factories stops. In return this hindered Roosevelt's aim of Recovery being as successful. One area in which Roosevelt was reluctant was to intervene was the civil rights of the black people. He only passed one civil rights law; in 1941 it became illegal to discriminate against black people in the employment practises of the defence industries. The New Deal itself did little for black people, since most black people in work had jobs as unskilled workers, which meant that some areas of the New Deal had less impact. ...read more.

During the twelve years of Republican rule, 1920-32, federal powers had been little used. Roosevelt gave the federal government a new role: dealing with a crisis, which was too big for individual states. The successes of the New Deal were that millions of poor people received relief (food, shelter, clothing). Millions of jobs were created. Extreme political movements, such as Communism and Fascism, did not take hold in the USA. Constitution work on projects such as roads and dams helped the future development of agriculture and industry. Government social security and welfare schemes, such as helping many ordinary people and continued in to the future. Workers rights and conditions were improved. Many Americans began to believe in themselves again. The weaknesses of the New Deal are unemployment was reduced but not ended. In 1938 it rose again. It was rearmament programme and entry into the Second World War that eventually solved the problem. The programme lacked total support, opposition hampered it. The programmes were least helpful to unskilled workers. This group included many black people. The programme did nothing to improve the civil rights of black people. Most women continued to be paid less than men for the same type of work. So the New deal was not a complete success. ?? ?? ?? ?? Naveis Iqbal 11TR 09/05/2007 ...read more.