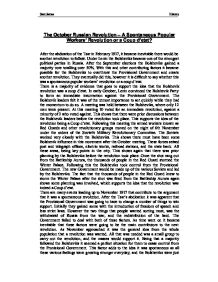 The October Russian Revolution - A Spontaneous Popular Workers' Revolution or a Coup d'etat?

The October Russian Revolution - A Spontaneous Popular Workers' Revolution or a Coup d'etat? After the abdication of the Tsar in February 1917, it became inevitable there would be another revolution to follow. Under Lenin the Bolsheviks became one of the strongest political parties in Russia. After the September elections the Bolsheviks gained a majority vote totalling over 50%. With this and other contributing factors it became possible for the Bolsheviks to overthrow the Provisional Government and create another revolution. They eventually did this, however it is difficult to say whether this was a spontaneous popular workers' revolution or a coup d'etat. There is a majority of evidence that goes to support the idea that the Bolshevik revolution was a coup d'etat. In early October, Lenin convinced the Bolshevik Party to form an immediate insurrection against the Provisional Government. The Bolshevik leaders felt it was of the utmost importance to act quickly while they had the momentum to do so. ...read more.

Following this the Bolsheviks took control from the Provisional Government. The new Government would be made up of the various Soviets and led by the Bolsheviks. The fact that the thousands of people in the Red Guard knew to storm the Winter Palace after the shot was fired from the Battleship Aurora again shows some planning was involved, which supports the idea that the revolution was indeed a Coup d'etat. There are many events leading up to November 1917 that contribute to the argument that it was a spontaneous revolution. After the Tsar's abdication it was apparent that the Provisional Government was going to have to change a number of things to win support. Initially they gained some with the introduction of freedom of speech and less strict laws. However the two things that people wanted sorting most, was the withdrawal of Russia from the war, and the redistribution of the land. ...read more.

The majority of the soldiers in Petrograd were also striking due to the war issue not being dealt with, so few people were opposing the Red Guards. Both these factors could add to the argument that the Bolsheviks made a spontaneous decision to try and revolutionise Russia that day, as the situation was perfect for them to do so. The situation would have been too difficult for the Bolsheviks to set up which shows there was no planning for it. However this ideal situation wouldn't have meant anything without some careful planning by the Bolsheviks. This is evident as that day took key points in Petrograd and knew exactly how to go about completing the revolution. Also the meeting in October prior to the revolution shows that the majority of the Bolshevik leaders wanted a quick revolution, so plans must have been made after on how to go about completing this. Due to these facts I feel the November revolution was mainly a Coup d'etat, however there is a great deal of evidence to suggest the revolution was spontaneous. Sam James History ...read more.