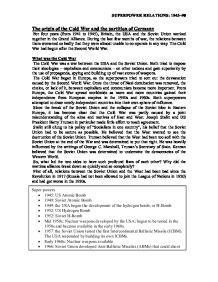 The origin of the Cold War and the partition of Germany

The origin of the Cold War and the partition of Germany For four years (from 1941 to 1945), Britain, the USA and the Soviet Union worked together in the Grand Alliance. During the last few months of war, the relations between them worsened so badly that they were almost unable to co-operate in any way. The Cold War had begun after the Second World War. What was the Cold War The Cold War was a war between the USA and the Soviet Union. Both tried to impose their ideologies - capitalism and communism - on other nations and gain superiority by the use of propaganda, spying and building up of vast stores of weapons. The Cold War began in Europe, as the superpowers tried to sort out the devastation caused by the Second World War. Once the threat of Nazi domination was removed, the choice, or lack of it, between capitalism and communism became more important. From Europe, the Cold War spread worldwide as more and more countries gained their independence from European empires in the 1950s and 1960s. Both superpowers attempted to draw newly-independent countries into their own sphere of influence. ...read more.

This time, they wanted to occupy Germany and keep the country under firm country. The question was: how was Germany to be divided? Eventually, the Allies decided that each would take responsibility for the area in which their armed forces were fighting when the German armed forces finally surrendered. This decision created one problem. Berlin would be in the Soviet Union. Stalin agreed that Berlin would be occupied jointly by four allies. * They agreed to divide Germany into four zones; each one would be occupied by one of the four allies. * Stalin agreed to accept France as one of the powers and the USA agreed to give France part of its zone. * Berlin would also be divided into four sectors. * The boundaries of Poland would be altered. Poland would be given land in the West, which would be taken from Germany, and would lose land in the East to the Soviet Union. * The Soviet Union would declare war on Japan three months after the war with Germany. * Stalin promised to allow free elections in the countries of Eastern Europe that had been occupied by the Soviet Army. ...read more.

The West wanted Germany to be allowed to recover economically. Britain and the USA remembered the impact that the Treaty of Versailles had in the 1920s and 1930s, and did not want that to happen again. This meant that the zones of Germany and the sectors of Berlin received very different treatment from the occupying forces. The Soviet sector was stripped of machinery and equipment, which was taken to the Soviet Union to help rebuild the country after the appalling damage inflicted by the war. The Western Allies wanted to rebuild their sectors and quickly began to reorganise industry and trade unions. To the West, Stalin appeared to be little more than a merciless predator; to Stalin, the West appeared to be laying the foundations for a strong Germany - something he feared more than anything else. In December 1946, Britain and the USA agreed to unite their zones in Germany for economic purposes. In January 1947 Bizonia was created. This was the first step on the road to the recovery of Germany. But in the Soviet Union it was greeted with fury. Not only were the Western Allies acting without the agreement of the Soviet Union, but also they appeared to be planning to rebuild Germany, when Stalin wanted to keep it as weak as possible. ?? ?? ?? ?? SUPERPOWER RELATIONS: 1945~90 ...read more.