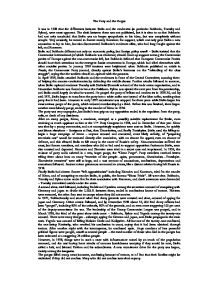 The Party and the Purges

The Party and the Purges It was in 1928 that the differences between Stalin and the moderates (in particular Bukharin, Tomsky and Rykov), were most apparent. The clash between them was not publicised, but it is clear to us that Bukharin had not only concluded that Stalin was no longer sympathetic to his ideas, but was completely without scruple. Very unwisely, he turned to former enemy Kamenev for support, which not only gave Stalin a new accusation to lay on him, but also disconcerted Bukharin's moderate allies, who had long fought against the left, and Kamenev. Stalin and Bukharin different not only on economic policy, but foreign policy aswell - Stalin insisted that the Communist International (of which Bukharin was chairman) should drum up support among the Communist parties of Europe against the non-communist left, but Bukharin believed that European Communist Parties should have their attentions on the emergent fascist movements in Europe, which had allied themselves with other socialist parties. In January 1929 tensions were heightened when Bukharin published an article in Pravda, the Communist Party journal, directly against Stalin's keenness on the "rekindling of the class struggle", saying that the workers should co-operate with the peasants. ...read more.

After so many purges, Kirov, a moderate, emerged as a possibly suitable replacement for Stalin, even receiving as much applause as him at the 17th Party Congress in 1934, and in December of that year Kirov was shot by a young communist, and not unsurprisingly suspicions were cast on Stalin. However, he quickly cast blame elsewhere - foreigners at first, then Zinovievites, and finally Trotskyites. Stalin used the killing to begin a huge campaign of terror - anyone accused and convicted, most likely unfairly, of "preparing terroristic acts" would be executed directly after conviction, with no chance for appeal, even no chance of defence, and this allowed Stalin to kill many in the name of Russia's safety. Non-communists suffered the most, but former members, and members who did or had used to support opposition factions to Stalin, were also arrested and deported. Kamenev and Zinoviev were tried in a secret case and imprisoned. In 1936, the re-issue of party cards ushered in a new, larger purge, the "Great Purge". Party members received letters telling them about how so many "enemies of the people...spies, provocators, diversionists...Trotskyite-Zinovievite monsters" were still at large, and a vast amount of accusations, confessions, deportations and executions followed. ...read more.

The leadership of the Young Communist League was purged, and in March 1938, the third of the great show trials came - Bukharin, Rykov and Yagoda among the twenty-one accused. There were many charges - sabotage, spying for German and Japan, anti-Stalin propaganda the main ones. Yagoda was accused of killing Maksim Gorki and Kuibyshev. All but one of the twenty-one confessed, the one being Kretinsky, who revoked his confession in court, saying that it had been obtained through torture. After another night with the interrogators, he confessed again. Huge numbers of less powerful political figures were purged, aswell as normal people - the total number of those who died in the purges has been estimated at a staggering 24 million people. However, in 1938, things were in such a state with infrastructure ruined by so much of the population removed, and the rest having heart attacks of nervous breakdowns worrying if they would be next, Stalin called a halt, and blamed Yezhov and his subordinates. A new recruitment drive for the party was begun, mainly among the bourgeoisie. The purges killed many, most innocent, confessing because of torture, or of fear that their families might be victimised if they did not confess. Many who did not confess were shot anyway. ...read more.