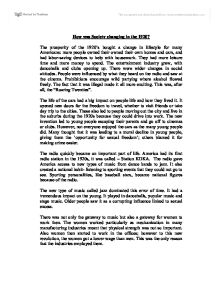 The prosperity of the 1920s bought a change in lifestyle for many Americans: more people owned their owned their own homes and cars, and had labor-saving devices to help with housework.

How was Society changing in the 1920?

The prosperity of the 1920’s bought a change in lifestyle for many Americans: more people owned their owned their own homes and cars, and had labor-saving devices to help with housework. They had more leisure time and more money to spend. The entertainment industry grew, with dancehalls and clubs opening up. There were wider changes in social attitudes. People were influenced by what they heard on the radio and saw at the cinema. Prohibitions encourage wild partying where alcohol flowed freely. The fact that it was illegal made it all more exciting. This was, after all, the “Roaring Twenties”.

The life of the cars had a big impact on people life and how they lived it. It opened new doors for the freedom to travel, whether to visit friends or take day trip to the cities. These also led to people moving out the city and live in the suburbs during the 1920s because they could drive into work. The new invention led to young people escaping their parents and go off to cinemas or clubs. However, not everyone enjoyed the cars as the many young people did. Many thought that it was leading to a moral decline in young people, giving them the ‘opportunity for sexual freedom’; others blamed it for making crime easier.

The radio quickly became an important part of life. America had its first radio station in the 1920s, it was called – Station KDKA.  The radio gave America access to new types of music from dance bands to jazz. It also created a national habit- listening to sporting events that they could not go to see. Sporting personalities, like baseball stars, became national figures because of the radio.

The new type of music called jazz dominated this error of time. It had a tremendous impact on the young. It played in dancehalls, popular music and stage music. Older people saw it as a corrupting influence linked to sexual excess.

There was not only the gateway to music but also a gateway for women to work then. The women worked particularly as mechanization in many manufacturing industries meant that physical strength was not so important. Also women then started to work in the offices; however to this new revolution, the women got a lower wage than men. This was the only reason that the industries employed them.

Some of the social restrictions women had faced before the war had weakened. Clothes had changed: the tight-waisted, ankle-length, voluminous dresses of pre-war days had been replaced by waist less knee-length, lightweight dresses. Also the hair style changed, women had shorter hair and wore make-up. They also had an extended limit to drive cars and smoke. This also made Henry Ford change the ‘only black car policy’ to making different colored cars. This definitely made a difference in history.

In conclusion, I think that the society changed for the better. This is because life had more freedom now and had more excitement towards it. It made people think how they do things then and made them see the much brighter side to life. It also made industries better for their marketing sales and having more to sell to make the economic boom. Young people had a big part to play in it. Without their courage of going out and exploring new things life would have now been a bit duller.