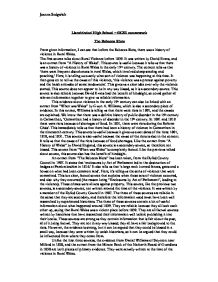 Llandrindod High School - GCSE coursework The Rebecca Riots From given information, I can see that before the Rebecca Riots, there was a history of violence in Rural Wales. The first source talks about Rural Violence before 1839. It was written by David Evans, and is an extract from "A History of Wales". This source is useful because it tells us that there was a history of violence in Rural Wales in the early 19th century. The content tells us that 'there were frequent disturbances in rural Wales, which involved sheep-stealing and poaching.' Here, it is telling us exactly what sort of violence was happening at this time. It then goes on to tell us the cause of this violence, 'this violence was a protest against poverty and the harsh attitudes of some landowners'. This gives us a clear idea over why the violence started. This source does not appear to be in any way biased, as it is a secondary source. This source is also reliable because David Evans had the benefit of hindsight, so could gather all relevant information together to give us reliable information. This evidence about violence in the early 19th century can also be linked with an extract from "When was Wales" by Gwyn A. Williams, which is also a secondary piece of evidence. In this extract, Williams is telling us that there were riots in 1801, and the causes are explained. We know that there was a definite history of public disorder in the 19th century in Carmarthen, 'Carmarthen had a history of disorder in the 19th century. In 1801 and 1818 there were riots because of shortages of food. In 1831, there were riots during the Reform Crisis'. This immediately tells us that there had been a history of violence in Carmarthen in the nineteenth century. This source is useful because it gives us exact dates of the riots: 1801, 1818, and 1831. ...read more.

This is a secondary piece of evidence, unlike all of the other sources in this section, which are primary evidence. The violence had been increasing - Rebecca and her followers had been going around destructing tollgates and tollhouses, but this led to even something more serious - the murder of Sarah Davies, an elderly toll keeper. Now this source is reliable, because it is secondary evidence extracted from a book. David Egan would have been an experienced historian, and removed any opinion from researched evidence, leaving just hard facts. This primary evidence has a high utility, because it shows us that the violence committed by Rebecca and her followers had reached such a climax that finally someone was killed during the attack of Pontarddulais. This source doesn't say whether or not Sarah Davies was in the way of the rioters, so we don't know whether her death was by accident, or deliberate. But assuming it was deliberate, we can conclude that between 1839 and 1843, violence in Wales had increased so much that someone was finally murdered. It can be concluded that the Rebecca Rioters were very dangerous, and resorted to violence, even murder, to get what they wanted, or to prove a point. But surely the rioters must have had a good reason to start abolishing tollgates, and destroying property that was not their own? There were many long-term causes as to why the rioting suddenly erupted. For many years before 1839, there were reasons as to why violence should break out in 1839. This source showing a long-term cause of the Rebecca Riots is from 1841, from the census of the population. It's purpose was to show the numbers and employment of able bodied adults over 21 years of age in Carmarthenshire, Cardiganshire, and Pembrokeshire in 1841. The fact that it's from a census means that it's strong evidence. However, not all census returns were accurate, but the fact that this information was taken from a census makes it reliable. ...read more.

From all of the sources describing the short-term causes of the Rebecca riots, I can see that there were many short-term causes for the Rebecca Riots breaking out, including: the law that was passed which forced the poor to labour in workhouses of incredibly poor conditions; the new introduction of the tithe; and the tolls on lime that were introduced. All of these issues would have been a direct cause of the Rebecca Riots. To conclude, I can say that there was a history of violence in Rural Wales before 1839. Sometimes, this violence was a protest against poverty and the harsh attitudes of some landowners. This tells us that, for the same reasons as the Rebecca Riots, violence had occurred in Wales. There was a history of violence in Rural Wales, so it was not impossible for this violence to be repeated in the form of rioting. There were also riots because of shortages of food in 1818. There were also shortages of food just before the Rebecca Riots, so there is some sort of link here, suggesting that it wasn't impossible for riots to break out again. Ceffyl Pren was also starting to emerge around this time, and lasted all through the Rebecca Riots which were between 1839 and 1843. Between this time, the violence was steadily rising. Tollgates were being destroyed by vicious people with axes, and finally it reached such a crescendo in 1843, that an elderly toll keeper was murdered during the riots. Leading up to the riots, some of the main reasons for the riots were: poor conditions of the farmhouses; poor diet; the social divide between the land owners and the farmers; the power the land owners had over the farmers; farmers were "treated like dogs"; rents to keep the farmland were raised; leases became shorter; the poor had to enter workhouses of incredibly poor conditions; the payments of the new tithe, and the new toll on tithe. All of these things would have added up, and finally the farmers had enough, so between 1839 and 1843, rioting across Wales broke out. Joanna Sedgwick ...read more.