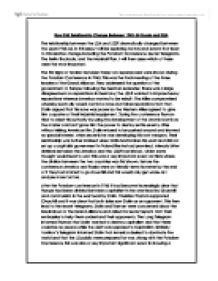 The relationship between the USA and USSR dramatically changed between the years 1943-56.

How Did Relationship Change Between 1943-56 Russia and USA The relationship between the USA and USSR dramatically changed between the years 1943-56. In this essay I will be exploring factors and events that lead to this relation change including the Potsdam Conference, Secret Telegrams, The Berlin Blockade, and the Marshall Plan. I will then asses which of these were the most important. The first signs of tension between these two superpowers were shown during the Potsdam Conference in 1945. This was the final meeting of the three leaders of the Grand Alliance. They addressed the question of the government of Europe following the German surrender. There was a large disagreement on reparations in Germany; the USSR wanted to impose heavy reparations whereas America wanted to be rebuilt. The Allies compromised whereby each ally would control a zone and takes reparations from that. Stalin argued that his zone was poorer so the Western Allies agreed to give him a quarter of their industrial equipment. During the conference Truman tried to assert his authority by using the development of the atomic bomb as the master card as it gave him the power to destroy entire enemy cities without risking American life. ...read more.

The Long Telegram informed Truman that Stalin wanted to destroy capitalism and that there could be no peace while the USSR was opposed to Capitalism. Similarly Novikov's Telegram informed Stalin that America desired to dominate the world and that the US public were prepared for war. Along with the Potsdam Conference this was also a very important significant event in showing a change in relation as, the telegrams caused the complete breakdown of the Grand Alliance as America and Russia now saw each other as opponents. Both countries thought that the other was trying to plan world domination. However is still believed that the Potsdam Conference was more important as it was the catalyst of these events. To weaken the attraction of communism, Truman introduced the Marshall Plan which would lend $13 billion of America's money to rebuild the shattered economies of Europe after World War II. In an attempt to contain communism. However, in order to qualify for American money, European countries had to agree to trade freely with America. The Marshall Plan had fatal consequences. ...read more.

President Truman responded with the Berlin airlift, which involved allied planes transporting supplies to West Berlin around the clock, which at its height provided 170,000 tonnes of supplies during January 1947. The airlift prevented the blockade from succeeding but made relations between the two powers a lot worse as Truman's response was peaceful and made Stalin's military blockade appear highly aggressive which greatly angered Stalin and resulted in the end of the blockade in September 1949. This was a key turning point as it showed Stalin that America would not hesitate to retaliate is the USSR did something they didn't agree with, which resulted in a further breakdown of relationships. Overall I can conlude that although all of the events I have mentioned did cause tension between the Soviet Union and America which therefore resulted in the crumbling of a relationship between them. However, I believe that the Potsdam Conference was the most important factor compared to the others as it was the catalyst and if signs of tension had not shown during the conference and America and the USSR stayed allies then none of the other events that I have mentioned would have ever taken place. ?? ?? ?? ?? ...read more.