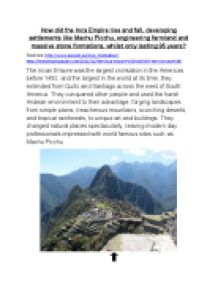 The rise and fall of the Inca Empire

﻿How did the Inca Empire rise and fall, developing settlements like Machu Picchu, engineering farmland and massive stone formations, whilst only lasting 95 years? Sources: http://www.ancient.eu/Inca_Civilization/, http://theonlyperuguide.com/2011/12/the-inca-empire-%E2%80%93-the-rise-and-fall/ The Incan Empire was the largest civilisation in the Americas before 1492, and the largest in the world at its time; they extended from Quito and Santiago across the west of South America. They conquered other people and used the harsh Andean environment to their advantage, forging landscapes from simple plains, treacherous mountains, scorching deserts, and tropical rainforests, to unique art and buildings. They changed natural places spectacularly, leaving modern day professionals impressed with world famous sites such as Machu Picchu. http://www.ancient.eu/uploads/images/display-3469.jpg?v=1431033873 Ancient fortress Machu Picchu (built between 1438 and 1471), once home to around 1000 people is found in the Andes above the river Urubamba. According to Inca legend, in the beginning, Viracocha (the creator god) emerged from the Pacific Ocean. He arrived at Lake Titicaca and created the sun and all cultural communities; the god buried these first people, and they emerged later from sacred pacarinas (springs and rocks) back into the world. The Incas became existent at Tiwanaku (pronounced ?Ti-a-huan-a-co?) from Inti (the sun god); they considered themselves as the chosen ?Children of the Sun? - their ruler was Inti?s bodily representation on Earth. The first Incas settled in the Valley of Cusco and Manco Capac, which later developed into their capital, Cusco. ...read more.

Tax was paid in food and drink, precious metals, textiles, and exotic items (e.g. feathers, dyes, and spondylus shell), or manual labourers (mit?a service). Farmland and animals were divided into three uses; production for religion and the gods, for the Inca ruler, and for the farmer?s own use. Locals helped to build and maintain roads which spread across the empire. They used quipu to keep track of statistics - a combination of knots and strings which was transportable and accurate. http://www.ancient.eu/uploads/images/display-2619.jpg?v=1431031742 The Incas forced their religion / administration on conquered civilisations to add them to the empire more efficiently. However, they also brought better storage for food and drink, roads, military aid, and luxury items. Cusco The Inca capital was the centre of the empire and had a peak population of 150,000. The gold and emerald encrusted ?Temple of the Sun? Coricancha temple controlled Cusco (built by Pachakuti). The layout of the capital was took on the shape of a puma; the royal city of Pumachupan was the tail; the temple of Sacsahuaman was the head. ?MOST SPLENDID WERE THE TEMPLES BUILT IN HONOUR OF INTI AND MAMA KILYA - THE FORMER WAS LINED WITH 700 2KG SHEETS OF BEATEN GOLD? Religion Inca rulers made regular pilgrimages to Tiwanaku where two shrines were built to Inti (the Sun god) and Mama Kilya (the moon goddess. These two gods were represented by large artworks of precious metal in the Coricancha temple in Cusco, which were worshipped by the second most important person after the king; Willaq Umu (the High Priest of the Sun). ...read more.

The Incan textiles, ceramics, and metalwork was far superior to any other Andean culture, even the expert craftsmen of the Moche civilisation. Collapse The ruling Incas were often unpopular with their people - the empire was created on, and sustained by, force. The Spanish conquistadores (led by Francisco Pizarro) took advantage of this during the mid-16th century. By the time the Incas faced their greatest challenge, they had not yet reached their ultimate point. Rebellions were frequent, and they were at war with Ecuador, where a second Inca capital (Quito) had been created. Even worse; they were in and epidemic of European diseased (e.g. smallpox) which had spread from Central America faster than the invaders who brought it. This killed between 65 and 90% of the population, including Wayna Qhapaq in 1528, and Waskar and Atahualpa, two of his sons, fought in a civil war for control of the empire just when the European treasure-hunters arrived. This combination of factors - rebellion, disease, and invasion - brought the shocking downfall of the mighty Inca Empire; the largest and richest ever seen in the Americas. The Inca language is still spoken today by around eight million people; there are also some of the buildings and artefacts which have survived the destruction of conquerors, looters, and time. Although they are a tiny proportion to the extensive treasures that have been lost, they are an unquestionable ?witness? to the wealth, creativity, and cultural achievements of the great, but 95 year old empire. ...read more.